This week I met up with a group of Canberra based social entrepreneurs to discuss some common issues facing the sector and to hear about some of the challenges working in the nation's capital. 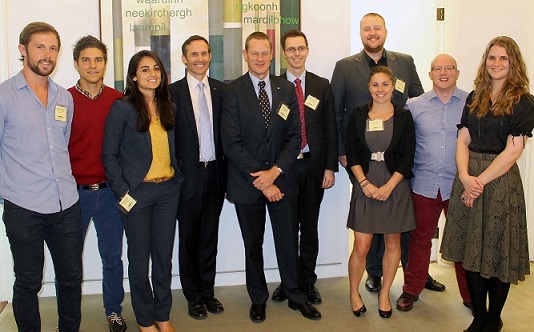 The group that gathered were Matt Stimson, Maddeline Mooney, Bradley Carron-Arthur, Lucianne Attard, Jovan Pejic, Stephen Collins, Michael Miller and Rikki Blacka. We covered a range of important issues including: how to use the internet to improve the quality of mental health service delivery; how to improve healthy eating among schoolchildren; how to improve the quality of Australian public debate; how to create co-working entrepreneurial spaces; how to boost volunteering; and how to better inspire community groups. Michael Traill spoke about the importance of focusing on evidence and what works, drawing on his experience in the private equity sector. The emphasis was on long-term results, as indeed it is in the private equity world, where the best firms can take five to 10 years to produce strong results.

There was a discussion of whether the sector should be known as the ‘not-for-profit sector’, a sort of definition by exclusion, or the ‘social purpose sector’, which Michael Traill argues is a better depiction of what the sector does. Among the challenges for social entrepreneurs were avoiding what one participant referred to as 'special snowflake syndrome'—the notion that  'everyone is unique but I'm somehow more unique than everyone else'; recognising the value of bringing in others who can add to the organisation; the challenge of saying 'No' politely; and building a space for social entrepreneurs to think long term. One of the participants noted that entrepreneurship is a solo journey but does not need to be a lonely journey and that the quality of leadership and team building is absolutely vital even more so in the social purpose world than in the business world. Attendees were united in the need to use social entrepreneurship to improve the quality of outcomes in disadvantaged areas.

The quality of the government's support for charities is an issue that concerns me in my portfolio of shadow Assistant Treasurer. One of the campaigns that I have been running in that space is to encourage the federal government to listen to the community sector and to support the Australian Charities and Not-for-profits Commission. We know already that this commission is supported by four in five charities, a number that has not changed in the year that the Abbott government has been committed to scrapping the charities commission. It is a rare regulator which has such strong backing from its sector, but the ACNC has that. An open letter signed by charities across the ideological spectrum has called on the Abbott government to rethink its ideologically driven decision to axe the ACNC.

This is the second so-called 'red tape repeal day' and a reminder, if one were needed, that the government has gone no further in its attempt to scrap the ACNC, a measure brought down on 'red tape repeal day' No. 1. This is ironic, of course, given that the ACNC acts as a one-stop shop, reducing the duplication of reporting at state and territory levels. Sensible jurisdictions like South Australia and the ACT have recognised that the benefit of the ACNC is that they can work together to reduce the paperwork burden on charities, allowing charities to spend more time helping the most vulnerable.

Fourteen thousand nine hundred and twenty four signatories have called on the government to keep the ACNC. Nearly 15,000 Australians believe that the charities commission should stay. I call on the Abbott government to support evidence based policy in the charities space rather than allowing the blinkered ideology of Tony Abbott and Kevin Andrews to prevail. I call on the government: listen to the sector and keep the ACNC.