Media Release - ScoMo Praises Multinational Laws... That He Voted Against

SHADOW MINISTER FOR COMPETITION AND PRODUCTIVITY

SHADOW MINISTER FOR CHARITIES AND NOT-FOR-PROFITS

SHADOW MINISTER FOR TRADE IN SERVICES

With extraordinary chutzpah, the Turnbull Government tried to take credit for the Australian Tax Office’s victory over Chevron in the Federal Court by claiming their own piecemeal tax measures are “working”.

On the day of the Federal Court decision, Scott Morrison tweeted: 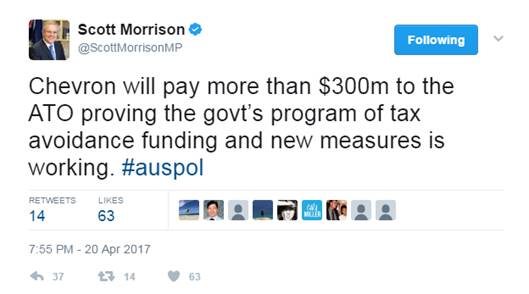 But here’s the rub – they voted against the very laws used by the tax office to take on Chevron.

In 2012, the Coalition voted against the then-Labor Government’s Tax Laws Amendment (Cross-Border Transfer Pricing) Bill (No. 1) 2012. At the time, they claimed that the law was retrospective, when in reality it simply clarified the operation of our tax laws, and ensured that multinationals couldn’t exploit loopholes.

It was Labor’s transfer pricing laws – opposed by the Coalition – that were integral to the court decision.

In welcoming the Chevron decision, the Coalition effectively admitted that they got it wrong when they voted against the laws that enabled the judgement.

If the Coalition had gotten their way five years ago, the budget would now be hundreds of millions of dollars worse off, and net debt would be rising even faster than it is already.

If the Turnbull Government is serious about multinational tax avoidance, they can prove it today by backing Labor’s fully costed measures to close debt-shifting loopholes.

If they refuse to take real action on debt-shifting, then just as in 2012, the Coalition is all sizzle and no steak.