Canberra Community Champion’s June shout out is Axial Housing, which is managed by Catholiccare.

Axial Housing is a ‘housing-first’ program that supports rough sleepers into permanent, secure housing. The program is unique as it does not discriminate based on employment status, criminal history or drug use and specifically targets people who have struggled to secure housing in the past. This is a significant, positive step towards more inclusive housing options for people with complex needs.

Another terrific aspect of Axial Housing is that it provides individual and flexible assistance for people based on their personal needs. And this support is wrap-around, which means that it extends beyond assisting a rough sleeper into a house and continues to provide long term support that is specifically targeted at breaking the cycle of homelessness. Importantly, it provides pet friendly housing. For many of us, a pet can be like family, so this consideration is very welcome. 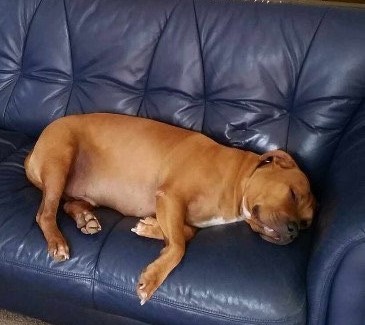 A former rough sleeper who had been on the streets for 20 years shared this photo of his dog in his new home, provided as part of the Axial Housing program.

Axial was launched in November of 2019 with the aim of ending street homelessness in Canberra. It is based on a model that has been used across the US and European cities that moves rough sleepers straight into independent long term housing, as opposed to progressing through stages of temporary accommodation as many other housing providers do. People experiencing chronic homelessness are more likely to struggle in the stages of accommodation and continue to homelessness, and this program seeks to redress that issue. The pilot originally sought to support 20 people who are sleeping rough into permanent housing in two years, but this has already been extended to 30 people due to its initial success.

The 2016 census told us there were about 54 people sleeping rough in Canberra.

The team at Axial Housing has been working to ensure that rough sleepers are housed and have the support services they need to remain housed. In the last two weeks of April alone, the Axial program housed five people. As the dangers of COVID-19 and cold Canberra winters present particular challenges for people sleeping rough, the support of Axial Housing is a vital step ameliorating homelessness.

You can find out more about Catholiccare here.