Last Tuesday, on a perfect Canberra morning, it was my pleasure to join the Indigenous Marathon Foundation's Closing the Gap Fun Run and Walk. It was 7 am on a crisp day and there we were at the shore of Lake Burley Griffin at the aptly named Reconciliation Place.

I acknowledge those from the Indigenous Marathon Foundation—Aaron West, Adrian Dodson-Shaw, Amanda Dent, Laura White, Peta MacKinnon, Sophie Linehan and Cara Smith—as well as those from the Department of the Prime Minister and Cabinet—Emily Jones and Rachel Norman. It was a pleasure, too, to be joined by my colleagues the member for Rankin and the member for Lingiari, as well as Senator Scullion.

There are just a handful of facts one needs to quote to recognise the challenges that we face in Indigenous policy today. The child mortality rate among Indigenous people in the Northern Territory is over 300 per 100,000. Nationally, the rate is less than 100 for non-Indigenous Australians. If we look at smoking, the share of Indigenous mothers who smoke after 20 weeks of pregnancy is 38 per cent compared to 12 per cent among non-Indigenous mothers. If we turn to education, the writing levels in NAPLAN of year 5 non-Indigenous students are higher than the levels for year 9 Indigenous students. The life expectancy gap is 8.6 years for men and 7.8 years for women, meaning that Indigenous Australians, on average, get eight fewer years with their families and loved ones. They get eight fewer Christmases, eight fewer birthdays and eight fewer years of productive work.

The sad truth of the Closing the Gap targets is they are not, in large part, on track. I seek leave to have incorporated in Hansard a table which sets out each of the targets and whether they are on or off track. 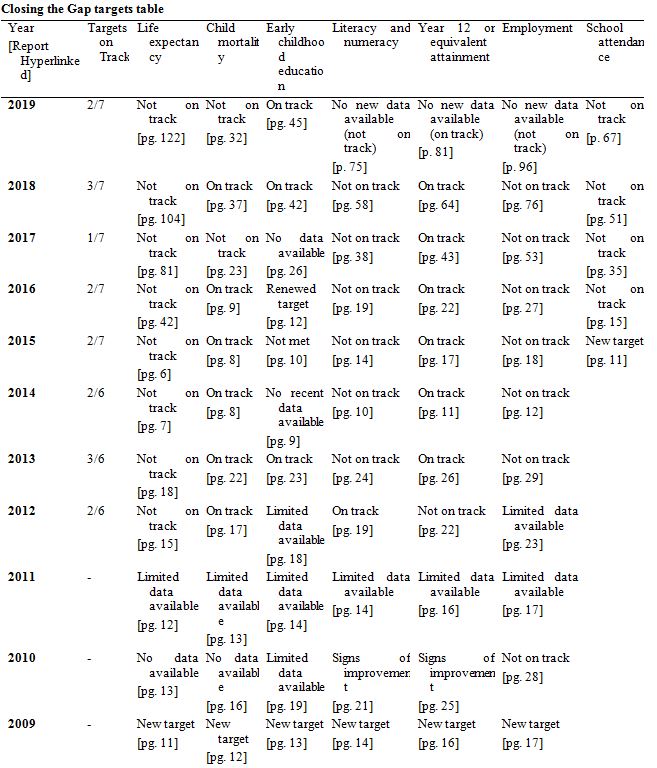 As the Leader of the Opposition outlined in his response to the Closing the Gap statement, a Labor government will enshrine a voice for the First Australians as our top priority for constitutional change. We will also embrace initiatives to encourage more teachers and more effective teachers in Indigenous communities. We'll train more Aboriginal apprentices and double the number of rangers. In our first hundred days, we will bring together people from all over the nation—police, child safety experts, families—to work out what must be done to protect the next generation of First Nations children. We'll invest in Aboriginal healthcare providers. We'll make justice reinvestment a national priority. And we'll support Indigenous languages, in this, the International Year of Indigenous Languages. Labor will provide compensation to survivors of the stolen generation from Commonwealth jurisdictions and create a national healing fund for descendants managing intergenerational trauma. And we'll abolish and replace the Community Development Program.I thank the government. According to the current numbers in 2019, only two of the seven targets are on track, those being the early childhood education target and the year 12 or equivalent attainment target. To compare this with earlier years: in 2013, for example, three out of six targets were on track; even last year, three out of seven targets were on track. To have only two out of the seven targets on track is, to all members of the House, I'm sure, deeply disturbing.

True reconciliation must be both practical and symbolic. It must recognise that there is deep value in the acknowledgement of the traditional elders of the land on which we meet, as I do in my public speeches, and as I do now, for the Ngunawal and Ngambri peoples, and as our parliament does when we open each day. It comes to reconciliation action plans being pursued by businesses and community organisations. It goes to simple symbolic acts. For example, is it really appropriate that the heads on Australian coins should be those of a monarch from the other side of the world rather than the heads of famous Indigenous Australians? Why not have our own Indigenous Australians gracing Australian coins?

It is appropriate that we in Australia acknowledge how far we have to go. This Closing the Gap report is a vital piece of truth-telling to Australia. It is to our shame, but it also a reminder of the work to be done to ensure that not two out of seven but seven out of seven targets are on track to be met.