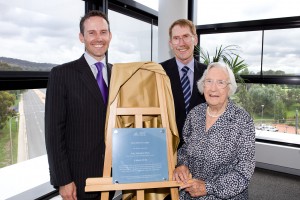 This follows on from the opening of Weeden Lodge at the University of Canberra last week. Both of these projects were funded through the National Rental Affordability Scheme, which has proven to be a great way to keep more Canberrans in work in the construction industry while also providing much-needed rental accommodation for students.

The media release is below.

550 more students to get affordable accommodation

Located in the City West precinct, the development was supported by contributions from the ACT and Commonwealth governments through the National Rental Affordability Scheme.

“Just last week I was pleased to open Weeden Lodge – which is already home to up to 220 University of Canberra students in the refurbished Cameron Offices in Belconnen. It is great to follow that this week by opening Lena Karmel Lodge, for a further 550 ANU students.

“Both of these new spaces for students deliver an affordable accommodation option at a discounted rent of at least 20 per cent below the market rate. This means that studying in Canberra remains an attractive option for current and future students,” the Chief Minister said.

Minister for Housing Brendan O’Connor said Lena Karmel Lodge was part of the Gillard Government’s $4.3 billion investment to increase the supply of affordable housing across the nation through the National Rental Affordability Scheme.

“That’s why we are helping to build 50,000 new rental properties nationwide, allowing households to save thousands of dollars each year in rent.

“Education is Canberra’s second largest export, and these extra beds mean we can continue to attract and educate Australia’s future workforce, while freeing up rental properties for other Canberrans,” Dr Leigh said.

As well as providing new accommodation for the 550 ANU students, the facilities also house a conference room, a cafeteria, small gym and ground floor shops.

The Chief Minister congratulated the ANU on nearing completion of its objective of building 1,033 new units through the National Rental Affordability Scheme.

“Significant additions of student accommodation are not only important to the ANU, but also bolster Canberra’s reputation as one of Australia’s leading cities for obtaining further education.

“The Territory Government, together with the Commonwealth is extremely proud to have contributed to these affordable rental units, which will also help improve overall rental affordability, which means fewer students are competing for accommodation in the private rental market,” the Chief Minister concluded.