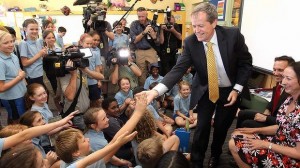 This morning, ahead of what will be a heated meeting between the Federal Education Minister and his state and territory counterparts, I issued this media release urging the Government to think again about its school funding broken pomise:

Tony Abbott has this week broken his promise to match Labor when it comes to school funding.

“This is an outrageous breach of the trust of the Australian people,” Member for Fraser Andrew Leigh said.

“This move shows that this government is not the government they said they’d be.”