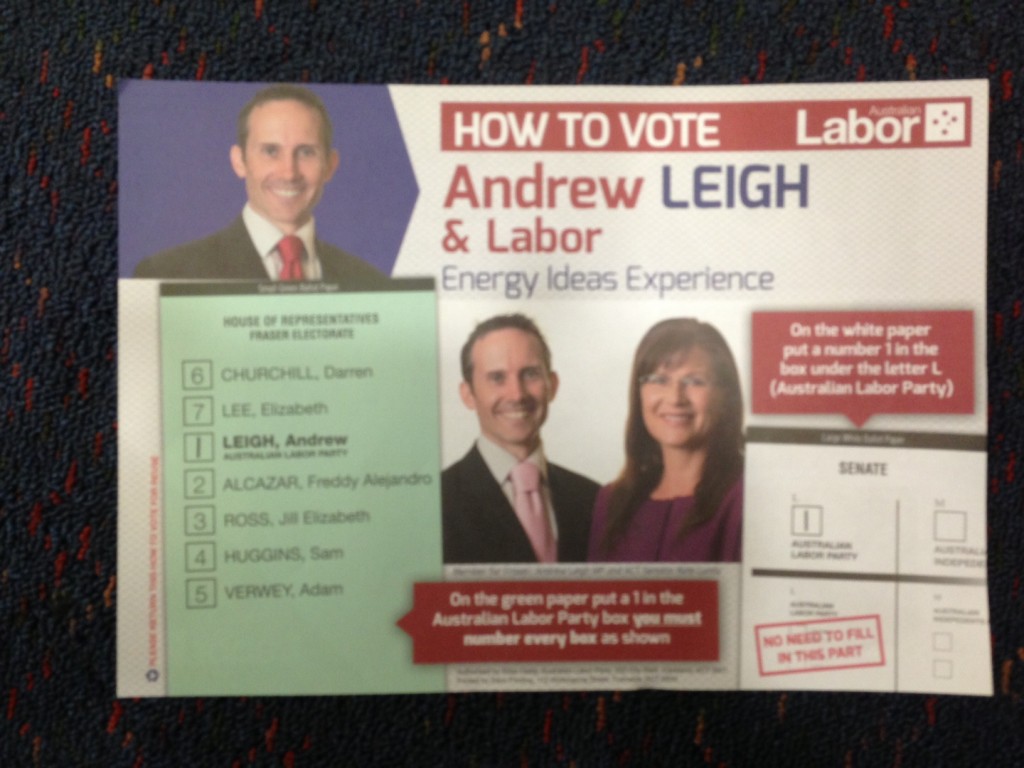 An article in today's Canberra Times discusses the preference-ordering on the ALP How-to-Vote card for Fraser. The journalist made no attempt to contact me before going to press, leaving readers with the unfortunate impression that I support an extremist party.

As someone who is passionate about multiculturalism, eliminating discrimination, and building community, I was disappointed not to be offered a chance to respond. So here's a summary of what's going on.

In federal elections, it's compulsory to number all boxes. So major parties' How-to-Vote cards typically number all the boxes.

In choosing a recommended numbering for the ALP How-to-Vote card, we could do one of two things.

And here's the thing. Since the seat of Fraser was created in 1974, preferences of the Labor and Liberal candidates have never been distributed. In other words, it has never mattered in Fraser how Labor voters numbered the other boxes.

Faced with the choice of worrying about a near-zero chance of Labor preferences being distributed, versus worrying about the very real rise in informality, Labor's How-to-Vote in Fraser opted to focus on reducing informality.

Labor voters in Fraser should number the other boxes any way they want - our How-to-Vote just suggests the easiest option. The key is: if you want to vote Labor in Fraser, please don't make a mistake!

PS. The article also incorrectly describes me as the member for Canberra, but I'll leave it to another time to take umbrage with that error.

* This differs from the Senate, where most candidates have some of their votes distributed to other candidates. There, you really do need to worry about where parties' preference flows are going.

Post-election update (as at 10 Sept): As expected, my preferences were not distributed. Nationally, the informal voting rate rose, but in Fraser, current figures indicate that it has fallen from 4.4% in 2010 to 3.7% in 2013 (a larger drop than was recorded in the ACT overall). Had the 2010 informal voting rate prevailed, nearly 1000 people would have been excluded from the democratic process in Fraser.