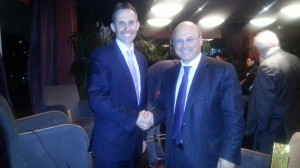 Last night, the Young Economists (ACT) hosted a debate on economic policy between Senator Arthur Sinodinos and myself. I regard Arthur as a friend, and so the discussion was much more in the nature of good-natured jousting than angry sniping. Thanks to a bunch of great questions from the floor, we covered tax reform, the future of manufacturing, fostering entrepreneurship, and improving the quality of education for the most disadvantaged. Here's a podcast of the debate.

But it seemed like a chance to have some fun, so taking a leaf from Stephen Koukoulas's challenge to Joe Hockey (thus far unanswered), I challenged Arthur to a modest wager. In my view, Australia's economic fundamentals are now pretty good. I think they could well improve under a re-elected Labor government, but expect them to sour if the Coalition is elected. Needless to say, Arthur believes the opposite.

The wager focuses on three indicators:

The loser will donate $100 to a charity of their choosing (I nominated the Indigenous Reading Project).