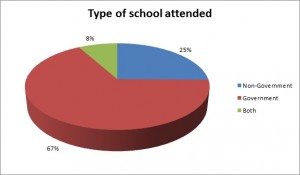 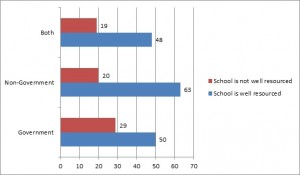 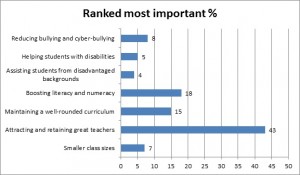 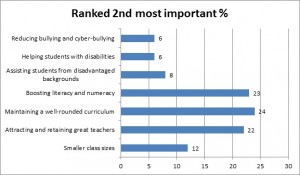 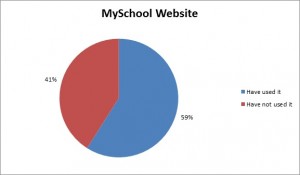 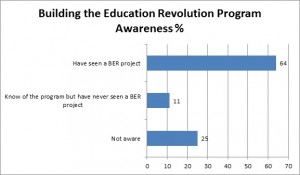 I recently surveyed the Fraser electorate on their experiences with ACT schools and some of their perception regarding our Government’s education reforms.

The results were positive and showed that the Government’s commitment to boosting literacy and numeracy, maintaining a well-rounded curriculum and attracting and retaining quality teachers is shared by parents.
Over 1000 people completed the survey which was distributed between October and December last year. Responses with postcodes from outside the ACT and from the southside were removed leaving 974 responses from Fraser. You may notice that some of the percentages don’t add to 100 per cent – this is due to rounding.

The sample group roughly reflects national numbers in this area. Here is a graph showing the proportion of respondents’ children who attend either government schools, non-government schools or both:

Overall, most parents felt their children’s schools were well resourced. However, there were slight discrepancies between parents whose children attended non-government and those who attended government schools. In the free response section, many parents highlighted the funding gaps between public and private schools. Some parents also spoke about the tired facilities at their local schools and these comments were mostly focused on government and Catholic schools. School funding is an important issue which is why I am a supporter of the Gonski recommendations and why the Gillard government will be pursuing reform in this area. The results below are shown as percentages.

I have been really lucky to have met many of the great teachers who work in our north-side schools. The importance of attracting and retaining quality teachers ranked by far the most important issue for parents completing the survey. In the free comments section, many parents spoke about the dedication of their child’s teachers and spoke about the need to improve teacher pays in order to attract and retain more like them. I have written more on this topic which you can read here.

Demonstrating the importance of quality teachers continued to rank highly showing that over 60% of respondents ranked it as their most or second most important issue. The Gillard Government’s focus on literacy and numeracy and strong curriculums were mirrored in the results of this survey demonstrating that policy is moving in a responsive direction and that parents and Government share the same priorities.

The MySchool Website was designed to empower parents with information about their children’s school and help them in their decisions regarding what kind of education is the best fit for them and the results show that most parents have utilised it. This means that more than half of the respondents have a suite of information at hand when making decisions about which school to send their children to. These results also demonstrate that parents are able to have a more informed discussion regarding school resourcing into the future.

Similarly, a large proportion of the respondents had seen a BER project around the area. This perhaps demonstrates how far reaching the program is and it’s great that many of our local schools have received funding for important improvements to their infrastructure.

Perhaps the most heartening section of the survey was this section which tended to produce very positive responses. The responses show that the ACT has great principals and teachers and that the Territory’s schools are well placed to deliver quality education for our kids. But they also show the strong relationships parents have with their child’s school and this again came out in the free responses where many parents spoke about how wonderful their child’s teachers were.