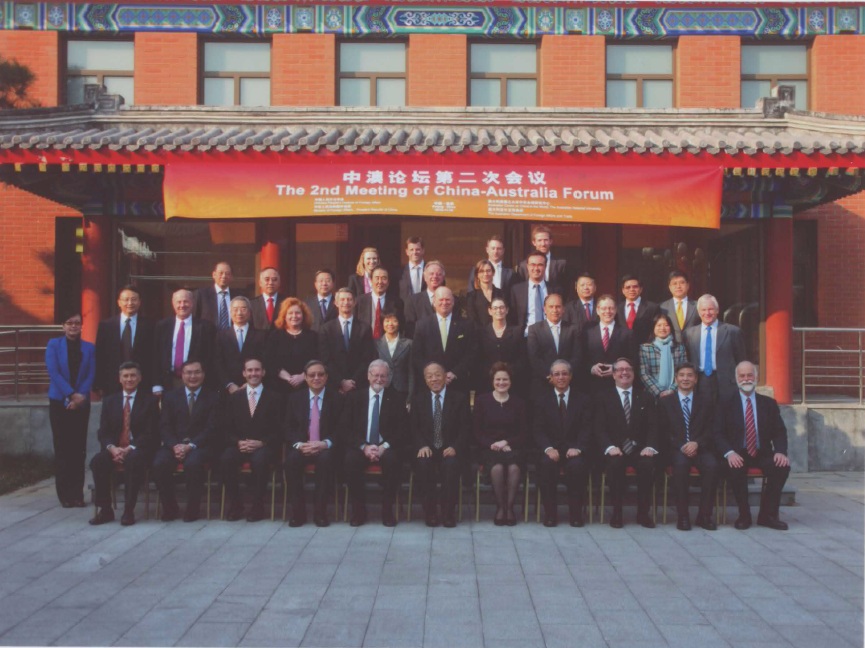 I spoke in parliament today about the Australia-China Forum, which I attended in Beijing on 15 November 2012.

Earlier this month it was my pleasure to attend the second annual Australia-China Forum. Established during a difficult period in the bilateral relationship, the forum provides an opportunity for businesspeople, government officials, academics and journalists to discuss issues that matter to our two countries. The Australian delegation was led by the indefatigable Gareth Evans, and the Chinese delegation was led by another former foreign minister, Li Zhaoxing. We were generously hosted by the Chinese People's Institute of Foreign Affairs, CPIFA. By chance, the forum took place on the precise day that the new Chinese leadership was announced to the world.

The economic rise of China since 1978 has been astonishing. In the short time since I last visited in 2006, China's GDP has nearly doubled. Australia's economic fortunes are now tied more closely with China than with the United States. Next month, Australia and China will mark the 40th anniversary of the bilateral relationship. As the Australia in the Asian century white paper noted, China is far more to us than a buyer of commodities, and we are more to them than a buyer of manufactured products. Australian architects are designing buildings across mainland China, while Chinese students are studying at every Australian university. Hundreds of thousands of tourists travel between the two countries annually. Billions of dollars of foreign investment occurs in both directions.

Among the issues discussed at the forum was foreign investment. Australian representatives made clear that there is broad recognition across the parliament that we have more jobs and higher wages as a result of foreign investment. Since the Channar joint venture between Sinosteel and Rio Tinto in the 1980s, Australia has welcomed foreign investment by China, and no proposal has been rejected by the Foreign Investment Review Board, although some have been approved with conditions. Similarly, many Australian firms are now investing in China, across a wide range of services and manufacturing industries.

Another important issue is foreign aid. As a Lowy Institute report has noted, both Australia and China are major donors in the Asia-Pacific region. Working together—either bilaterally, multilaterally, or through vertical funds like the Global Fund to Fight AIDS, Tuberculosis and Malaria—will be important in reducing poverty in our shared neighbourhood.

As with any good discussion, there were differences. In the case of the competing claims in the South China Sea, Australian representatives stated that this was a regional issue that required a regional solution, with relevant governments clarifying and pursuing their territorial claims and accompanying maritime rights in accordance with international law, including the United Nations Convention on the Law of the Sea.

In terms of military engagement, Chinese representatives criticised Australia's decision to allow a small number of United States marines to rotate through Darwin in the dry season. My own view is that the US 'pivot' towards the Asia-Pacific is welcome, and Australia can maintain strong relationships with the world's two largest economies. Some commentators, including Hugh White—who was not at the forum—have suggested that the rise of China will have to cause Australia to rethink its strong alliance with the US, but I am more optimistic about our options. Australia can be a good friend to China while being honest on difficult issues such as human rights.

Australia's relationship with China has suffered some difficulties over recent decades, most notably during the 'deputy sheriff' era of the early 2000s. To make sure we maintain a strong relationship, people-to-people dialogues are important. Australia now has over 30 bilateral dialogues with China, many at a ministerial level but also some including 1.5-track dialogues such as the Australia-China Forum. The Australian delegation included Professor Richard Rigby, Ambassador Frances Adamson, Rowan Callick, Tracy Colgan, Mike Gallagher, Henry Makeham (the founder of the Australia-China Youth Dialogue), Hamish McDonald, Peter Rowe, Trevor Rowe, Warwick Smith, Catherine Tanna, Frank Tudor, James Zeng and BJ Zhuang.

I am grateful to officials from the Department of Foreign Affairs and Trade for their organisational efforts and to the other participants for their insightful comments. Unfortunately, I was the only federal parliamentarian in attendance, as the invited coalition parliamentarian was unable to rearrange his diary so as to be able to attend. I very much hope that the coalition will be able to actively participate in the next forum, particularly as it is scheduled to be held in 2013 at the Australian National University, placing it within my own electorate of Fraser.

In conclusion, I returned from Beijing with a strong sense that the Australia-China relationship is vigorous, dynamic and will continue to strengthen over coming decades. I am grateful to have many Chinese-Australians in my electorate and to have had the opportunity and indeed the privilege of attending the Australia-China forum.