When I'm out running on the bush trails, I'm usually listening to a podcast or an audiobook. I've ploughed through a few duds, but have also enjoyed several gems. Here's 38 of my favourite fiction and non-fiction books of 2022 (including a few that were published in prior years, that I'm only now catching up with).

The Rabbit Hutch - Tess Gunty: A darkly beautiful novel, about teens surviving a turbulent childhood in one of the American towns hit hard by deindustrialisation

I Hate the Ivy League - Malcolm Gladwell: Worth reading for every Ivy league graduate, and a reminder that universities are better when they teach more students

QAnon and On – Van Badham: One of Australia’s most incisive writers takes a deep dive into the murky world of conspiracy theories. A fascinating and brave book (if you want to know just how brave, listen to our conversation about the book at ANU, available on my website).

Astrophysics for People in a Hurry - Neil deGrasse Tyson: Pop physics books never seem to stick in my brain for long enough, but this one did give me plenty of fun facts to share with my teenage boys

This Is Going to Hurt - Adam Kay: Diary of a young obstetrics doctor, working in the UK NHS. Savagely funny. It came out a few years ago, and I’m just catching up.

The Last White Man - Mohsin Hamid: A remarkable novel about race and racism. The writing is spare and engaging.

Safety Net: The Future of Welfare in Australia – Daniel Mulino: My brilliant parliamentary colleague discusses how we got our institutions, and how to reform them for the challenges of the future.

Lifespan - David A. Sinclair: David is an Aussie working on life extension at Harvard. I interviewed him on my podcast a few years ago, and he’s since written a book about his work.

A Tale for the Time Being - Ruth Ozeki: A novel by a Zen Buddhist priest about childhood and belonging. It took a while to draw me in.

Battling the Big Lie - Dan Pfeiffer: A political insider’s account of how social media platforms are damaging US democracy.

The Candy House - Jennifer Egan: What will the tech world do next to change our reality? Jennifer Egan’s novel explores one possibility.

Remember - Lisa Genova: Do you kick yourself for forgetting things? This book by a neuroscientist will help you figure out when it matters, and when it doesn’t.

The Family Firm - Emily Oster: The latest in the Oster series of child-rearing books. As an economist, I love it. Maybe one day the rest of my family will too.

Station Eleven - Emily St. John Mandel: I couldn’t read this during COVID, but I’m glad that I eventually found out why everyone else was raving about it.

100% Democracy – The Case for Universal Voting – EJ Dionne and Miles Rapoport: I’ve loved EJ Dionne since I read his classic ‘Why Americans Hate Politics’ nearly a quarter of a century ago. This one is the perfect gift for your American friend who is outraged by Australia’s compulsory voting system (yet somehow thinks compulsory juries are just fine).

The Plot - Jean Hanff Korelitz: The idea of this novel is simple – what if you discovered a plot that was too good not to steal? Best thriller I’ve read in ages.

The Startup Wife - Tahmima Anam: A novel about ambition, immigration and relationships, set in Silicon Valley

Black Lives, White Law: Locked Up and Locked Out in Australia - Russell Marks: The incarceration rate among Indigenous Australians is scandalously high. Marks analyses how we got here, and what it will take to find another path.

The Beauty of Dusk - Frank Bruni: A gentle book about the pleasure of wisdom, by one of my favourite New York Times columnists.

From Strength to Strength - Arthur C. Brooks: The former head of the Brookings Institution offers advice on living well and leading effectively.

Nine Perfect Strangers - Liane Moriarty: A super-fun novel about family connections and how people cope when the unexpected happens.

The Secret Life of Groceries - Benjamin Lorr: From the brutal life of truckers to the history of canning, this book changed the way I think about shopping.

The Power of Regret - Daniel H. Pink: A clever take on a surprisingly important topic. Don’t avoid regrets, says Pink – use them to avoid making the same mistake twice. Pink was another of my terrific Good Life podcast guests this year.

Crossroads, A Novel - Jonathan Franzen: This book beautifully captured the raw intensity of teenage life, through the lens of a dysfunctional Christian youth group. It is set in the pre-internet age, which somehow made it feel like a bygone era.

Dreamers and Schemers - Frank Bongiorno: If you want a comprehensive political history of Australia in a single volume, this is the book for you.

Bewilderment - Richard Powers: A father-son novel about a scientist dad and his unusual son. The author’s name is an aptronym. This book is powerful, but not for the faint-hearted.

The Tyranny of Merit - Michael J. Sandel: Few philosophers write as compellingly as Michael Sandel, whose course has long been the most popular undergraduate class at Harvard.

Good Arguments – Bo Seo: A mix of memoir and debating handbook, this is a perfect gift for a debate-loving teen who’d like to follow Bo’s example of using your quick wit to travel the world. If you prefer the audio version, our ANU launch chat is on my podcast.

Extra Life - Steven Johnson: One of the great science popularisers, Johnson takes a look at the history of work to extend life, and some of the people that dominate it.

Sprint - Jake Knapp: In the technology world, five-day ‘sprints’ to solve a big problem have become ubiquitous. Knapp argues that they could work in other sectors too, and provides a handbook on how to run an effective sprint.

Talent – Tyler Cowen and Daniel Gross: Well worth reading for anyone involved in hiring people or allocating grants. Grounded in evidence, and packed with insights.

Of Boys and Men – Richard V. Reeves: Too many discussions of the challenges faced by men end up minimising the issues faced by women. Reeves is a feminist, and frequently comes back to the theme that ‘we can hold two ideas in our heads’. Especially useful for those of us raising boys.

What we Owe the Future – William MacAskill: An excellent case for longtermism, following on from books by Toby Ord and others. Let’s hope the movement isn’t too badly bruised by the FTX debacle.

Lessons – Ian McEwan: I read everything McEwan writes, and this might well be my favourite yet. Sweeping, insightful and complete.

Parent Nation – Dana Suskind: This book about early childhood development has as its heart a simple thought experiment: suppose your child couldn’t be raised by you, but had to be raised by another randomly chosen parent. What would you want society’s institutions to look like so your beloved child had the best chance?

Fast After 50 – Joe Friel: An experienced triathlon coach discusses how to keep racing speedily after you hit the half-century. Having turned 50 in August, Friel certainly gave me a bunch of new ideas for training well and racing fast.

The Voltage Effect – John List: An entertaining read from Chicago economist John List explores an underrated question – how do we get more ideas to scale?

Oh, and when I say 'the podcast', I mean The Good Life: Andrew Leigh in Conversation, available through Spotify, Apple Podcasts or your favourite podcast app. 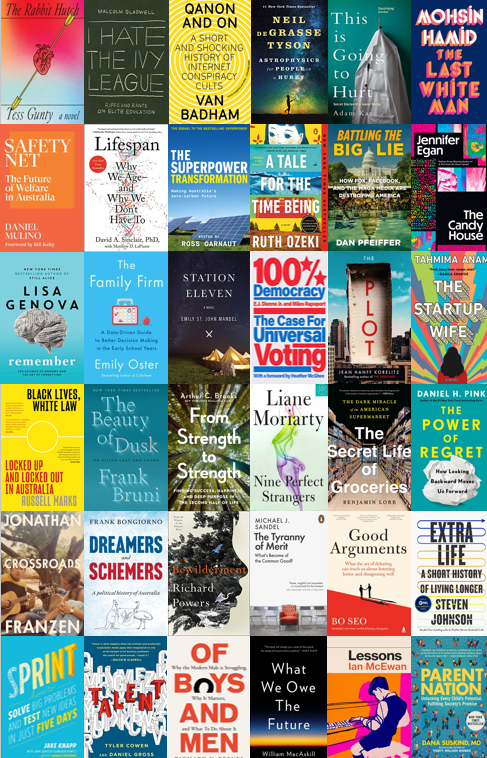