Prior to the 2013 election, the coalition pledged that no more than 12,000 public service jobs would go. We heard very clearly from the member for Sturt:

There is no ambiguity about the coalition's position … if elected, we will reduce the Commonwealth Public Service by 12,000 through natural attrition.

The then Leader of the Liberal Party, the member for Warringah, said:

I really want to stress that we are not talking about forced redundancies. We are talking about not replacing everyone who leaves; that's all.

Since the election of the coalition we have seen anything but. We have seen people forced out of their jobs, agencies sent interstate—in the case of the Australian Pesticides and Veterinary Medicines Authority, to the electorate of the minister responsible for managing that agency, despite the fact that a cost-benefit study showed it was a bad deal for the taxpayer. According to figures from the Community and Public Sector Union, the latest budget sees staffing reductions in 17 of the 25 agencies that they analysed. 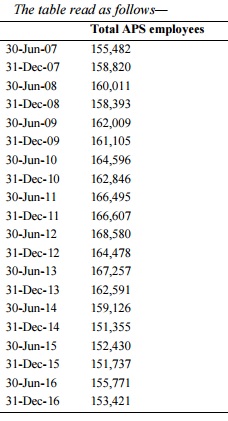 The public serves Australia. Six out of 10 public servants work outside Canberra. But those who work in Canberra are no less valuable for that. They are citizens of Australia. They work hard to serve both sides of government, and yet they have been abysmally treated by this government.

At one of my regular street stalls in Gungahlin a young couple came up to me. They said that she worked in a federal government department. She had three degrees, had volunteered overseas and had many years of experience in the Public Service, gained by working on short-term contracts. But, due to the Public Service freeze that was in place, they did not feel that they were able to start a family. As the woman of the couple—let us call her Jess—said to me: 'I just do not have the confidence that I can sport a seven-month belly and negotiate an extension of contract.' So they are putting off starting a family until they can find a job that offers more certainty.

The decimation of the Public Service—and that is literally what it has been—has been enormously damaging for the great people of Canberra. The cuts to the Public Service have occurred in almost every area but two: non-ongoing numbers have increased under the Liberals, and the volume of contracts has increased. So uncertain, short-term work has taken the place of sustainable, ongoing public sector work.