ACNC reduces costs for charities across the ACT - Wednesday 16 April, 2014 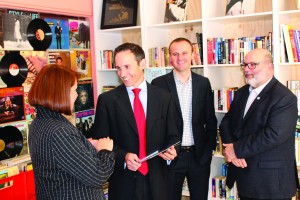 This morning I held a press event with ACT Treasurer, Andrew Barr, and leaders in the community sector - Lifeline Canberra CEO, Mike Zissler, and Lynne Harwood who heads [email protected] -  to advocate to keep the charities commission and grow the benefits to charities. It's great news and proof of the potential of the ACNC that the Territory Government is ceding many of its charity reporting requirements to the ACNC in the interests of streamlining reporting and reducing costs for charities. Other states are urged to follow the ACT's lead.

ACNC reduces costs for charities across for the Australian Capital Territory

The ACT Government is cutting red tape to save up to $2 million a year for local charities by working with the first national independent charity regulator, the Australian Charities and Not for Profits Commission (ACNC).

But ACT Treasurer and Community Services Minister Andrew Barr said that can only continue if the Commonwealth Government listens to the pleas of the charitable sector and keeps the ACNC.

“If the Commonwealth commits to keeping the ACNC, the ACT Government will legislate so that charities and other incorporated associations do not need to duplicate reporting made to the ACNC,” Minister Barr said.

“This ‘report once, use many’ principle will reduce the regulatory burden on charities.”

“Only a national regulator can provide a one-stop shop and reduce reporting duplication for charities that work and fundraise across states and territories.”

“It is impossible for one level of government by itself to reap the full savings benefit that co-operation with the ACNC promised. By working together, both regulatory red-tape and funding agency red-tape can be reduced for the sector.’

Federal Shadow Assistant Treasurer, Dr Andrew Leigh, who has portfolio responsibility for the ACNC, again called on the Abbott government to reverse its decision to abolish the regulator.

“The ACT Government’s cooperation with the ACNC demonstrates how the reporting burden can be reduced for Canberra charities – allowing them to spend more time building community and helping the vulnerable.”

“I hope it causes the Abbott Government to rethink its plan to scrap the ACNC. If the Coalition truly wants to make life easier for charities, they should encourage other states and territories to follow the ACT’s lead.”

“We know that the ACNC is enormously popular, with four out of five charities supporting it. An open letter of support was recently signed by over 40 charities, including World Vision, Lifeline, the Hillsong Church and ACOSS.”

Minister Barr and Dr Leigh joined staff today at the Braddon shopfront of Lifeline Canberra, a charity offering telephone counselling to the people of Canberra and the surrounding region.

The Senate has referred the Abbott Government’s ACNC Repeal Bill (No.1) to the Senate Economics Legislation Committee for an inquiry which will report in June.

Charities and not for profit organisations are invited to make submissions before 2 May 2014.