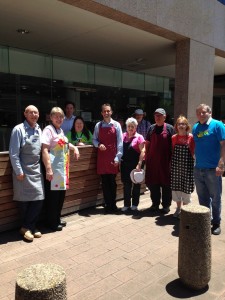 This week, I spoke in parliament about a barbecue for the homeless at the Canberra Early Morning Centre.

On 26 November 2013 it was my pleasure with Team Leigh volunteers to put on a barbecue at the Canberra Early Morning Centre, as part of Social Inclusion Week. Social Inclusion Week, created by Jonathon Welch, aims to ensure that all Australians feel included and valued. It is about connecting local communities, workmates, family and friends and addressing isolation, loneliness and homelessness.

About 40 people attended the barbecue at the Early Morning Centre, a service hub under the auspices of the Canberra City Uniting Church. The Early Morning Centre provides office facilities such as desks, phones, a computer with internet access, a post office box address and safe mail collection point for mail, and laundry and shower facilities for people in Canberra who are homeless. It provides a free breakfast each day, and support and referral services. The Early Morning Centre is a place of support and community for Canberrans doing it tough, where they can catch up with friends, get help with day-to-day business and enjoy a meal.

Other groups supported the barbecue on the day, including Supportive Tenancy Services, Lifeline Canberra, St Vincent de Paul Street to Home, Partners in Recovery and Red Cross Roadhouse Services. I would like to thank the Early Morning Centre Team: Chris Stokman, John McDonald, board members, Margaret Watt and Terry Birtles, and the Friends of the Early Morning Centre patron Tim Gavel, as well as my friend Bronwyn Fagan. The barbecue was Margaret Watts's idea and I would like to thank her connecting us with the Early Morning Centre in this regard. I want to thank the onion cutters, the salad preparers and the snag turners from Team Leigh—Rob and Robin Eakin, Rod Holesgrove, Meredith Hinchliffe, Adrian Rumore, Joan Costanzo and Matthew Walker. The great Aussie barbecue is a terrific tradition which encapsulates so many great Australian values: mateship, the fair go, egalitarianism, and—with vegetarian and halal sausages—multiculturalism.

I am deeply concerned about the drop in community spirit that has occurred in Australia over the past few generations. I wrote about this in Disconnected, and it is an issue of great concern to me. It is a pleasure to be able to work with great Canberra community organisations like the Early Morning Centre, which are reaching out to some of the most vulnerable Canberrans, and making sure that they are part of our great city and the community spirit contained within it. Working together we can deal with social isolation, build a stronger community and make sure that Australians are better connected.