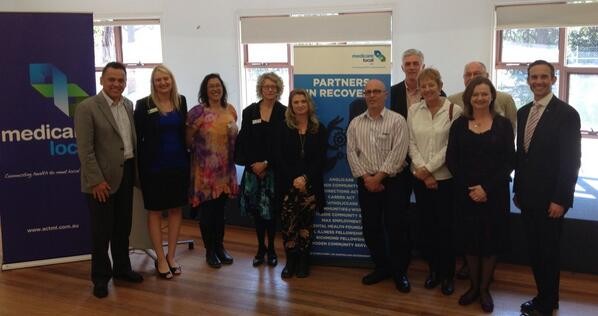 We all want the live a contributing life. Today, I was pleased to attend the launch of a program for people living with a severe mental illness; a program overseen by ACT Medicare Local aimed at ensuring more than 400 Canberrans can be assisted with their complex needs to live a meaningful and less-isolated life.

The Minister for Mental Health and Ageing, Senator Jacinta Collins joined Senator for  the ACT, Kate Lundy and Federal Member for Fraser, Andrew Leigh to launch the  Partners in Recovery program in Dickson today.

“People living with psychosis are 10 times more likely to be homeless, 50 per cent less  likely to have completed school and have a life expectancy that lags the national  average by up to 30 years,” Senator Collins said.

“The last thing people with severe mental illness, their families and carers need is to battle with multiple service systems,” Senator Collins said.

The Partners in Recovery Program in Canberra is led by the ACT Medicare Local, and will bring together support services like income support, housing, employment and medical care to facilitate ‘wrap around care’ for people with severe and long term mental illness, and complex needs.

The ACT Medicare Local was funded almost $8 million over four years to deliver the Partners in Recovery program, as part of Federal Labor’s $2.2 billion mental health form package, and will provide community based recovery support for Canberrans with severe mental health issues.

Senator Lundy said the Partners in Recovery program was another example of how the ACT Medicare Local is supporting the health needs of the Canberra region.

“It is great to see the partnerships that have developed between our local support services through the consortium being led by the ACT Medicare Local”, Senator Lundy said.

Federal Member for Fraser, Andrew Leigh, said the Partners in Recovery program in Canberra is expected to deliver critical support to over 400 people.

“These are critical services in our local community, Canberra cannot afford for these programs to be cut under an Abbott Government,” said Dr Leigh.

The ACT Medicare Local employs around 30 frontline medical workers including GPs, nurses and care coordinators. These important services would be at risk under a Coalition government.