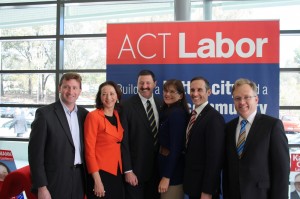 Today I joined my parliamentary colleagues to launch our 2013 election campaign. We also announced $10 million for the second stage of the University of Canberra's Sports Hub, a new sport and health research, training and administration facility to inspire and engage young people in sport and fitness across the capital region. My thanks to our volunteers and the ACT Labor team including Chris Sant who is running for the second Senate seat and candidate for Hume Michael Pilbrow.

The Rudd Labor Government today announced $10 million towards the University of Canberra Sports Hub project, which will provide state-of-the-art sports facilities and community engagement programs for Canberra and the surrounding region.

The Sports Hub project includes the building of a sport and health research, training and administration facility. The project will also establish a mobile sports fitness and health clinic which will work to promote the benefits of an active lifestyle through community engagement and participation.

The UC Sports Hub project is a collaborative effort between the Rudd Labor Government, the ACT Government, the University of Canberra Union and the ACT and Southern NSW Rugby Union.

ACT Senator, Kate Lundy, Member for Fraser, Andrew Leigh MP and Member for Eden-Monaro, Mike Kelly MP made the Regional Development Australian Fund announcement today during a visit to the University of Canberra.

Senator Lundy said the Rudd Labor Government is serious about investing in Canberra to meet future challenges and opportunities.

“Establishing an internationally recognised Sports Hub will ensure the region has the expertise in the sport and fitness fields, which will in turn attract more businesses and research to the region, driving economic growth and sustainability

“This project will add to the state-of-the-art facilities that already exist at the Australian Institute of Sport and will help to further increase Canberra’s international reputation for sporting excellence and engagement,” said Senator Lundy.

Member for Eden-Monaro, Dr Mike Kelly said this project reaches out beyond Canberra’s borders and will be a massive boost for the entire region.

“The establishment of mobile sports fitness and health clinics will allow the project to deliver real benefits to a number of communities in the ACT and surrounding region,” said Dr Kelly.

“Sports clubs across the region will have the benefit of working with these clinics to boost sports participation and promote healthy and active lifestyles especially in our children.

“I commend the foresight of the project in reaching out to communities in Queanbeyan, Cooma-Monaro and down to the South Coast,” said Dr Kelly.

Member for Fraser, Andrew Leigh said the building and construction phase of the project will also provide jobs and an economic boost to the Canberra community.

“Canberra plays a significant role as a regional hub city to a broader population of around 600,000 people, and is committed to building connection, belonging and collaboration within the region,” said Dr Leigh.

“This is an investment in sports research and industry and this project will continue to give back to the community and will provide an ongoing economic benefit to the local and regional economy.

The funds for the project are from the latest round of the Regional Development Australia Fund. Funding for this project is already included in the budget