Speech to the Mining for Development Conference 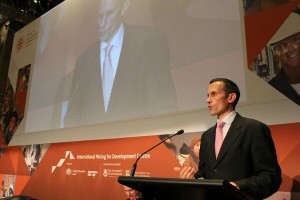 Good morning – I’d like to welcome you to the Mining for Development Conference, on behalf of the Australian Government and the Minister for Foreign Affairs, the Honourable Bob Carr.

I acknowledge the traditional owners of the land, the Gadigal people of the Eora Nation.

I’d like to thank those of you who have travelled a long way to be here today, including elected representatives from Africa, Asia, Europe, Latin America and the Pacific, and leaders from civil society, academia and industry.

I particularly acknowledge my friend and parliamentary colleague Kirsten Livermore, the federal member for Capricornia in Queensland. Kirsten has a particular interest in mining in Mongolia, a country she has visited three times in the past four years. She tells me that over that time, she has seen major improvements in infrastructure and skills. Average incomes in Ulan Bator have risen – but so has inequality. Rio Tinto is working hard to meet the Mongolian government’s expectations that the benefits of the giant Oyu Tolgoi mine are spread across the Mongolian population. And AusAID working in Mongolia on development challenges such as managing the competing demands for water resources. Similar challenges confront Kirsten and me as we work with mining communities across Australia.

Let me start with the Australian mining story.

When Edward Hargraves announced in 1851 that he had found gold in Bathurst, it started an avalanche. Over the next decade, the population nearly tripled and our national income almost quadrupled, as people flooded in to take advantage of Australia’s mineral wealth.

It isn’t much of an exaggeration to say that central Melbourne is largely a product of the Gold Rushes, which continued until the late-1800s. The Royal Exhibition Building, opened in 1880, was modelled on the Duomo in Florence. By the end of the nineteenth century, Australians enjoyed the highest standard of living in the world.

While our nineteenth century mining boom was driven by supply, Australia’s most recent mining boom has been driven by demand. The past decade has seen world commodity prices triple. The terms of trade recently reached a 140-year high.

Urbanising China and India need steel to make their skyscrapers, and Australia happens to be the world’s biggest producer of iron ore, and a major producer of coking coal. At present, we export iron ore at the rate of 4 tonnes a second.

According to Treasury official David Gruen, while the mining and mining-related sectors constitute only one-fifth of the economy, they have in recent years contributed more than two-thirds of Australia’s economic growth.

And yet compared with the 1970s terms of trade shock, the benefits of this mining boom are flowing more broadly through the economy. Inflation is low, unemployment is below most developed nations, and even the dispersion of unemployment has fallen. We’ve shifted policy settings too. Moving from the old royalty regime to a profits-based mining tax means that when prices rise, tax revenue goes up too. In an environment where parts of the non-mining sector are suffering from ‘Dutch Disease’, this seems a reasonable approach.

The Australian government is working with industry and Indigenous communities to

create much-needed employment and economic opportunities. In fact, the Australian Government and Minerals Council of Australia have had a memorandum of understanding in place since 2005 that seeks to do just this. It focuses on helping workers obtain drivers licences and housing, raising literacy and helping Indigenous people make the transition to school and work.

Mining jobs matter. But because mining is so capital-intensive, they cannot be the only way in which the benefits of mining are shared across the economy.

So I think Australia has an obligation to share our mining experience with developing nations and to work with multinational organisations such as the United Nations, Asian Development Bank and World Bank.

Like Australia, many developing countries are well endowed with natural resources. And yet we all know of the ‘resource curse’ – the fact that developing nations who have more natural resources tend to have lower growth rates and perform more poorly on indicators of democracy.

This ‘resource curse’ arises because mineral endowments are easier for non-democratic leaders to expropriate than incomes derived from other sources, such as farming, industry or services.

The curse can be seen in the history of the Democratic Republic of Congo, a country whose extraordinary mineral wealth has more often been a source of conflict than a wellspring of prosperity. The DRC’s troubled history reflects the challenges of ensuring that minerals benefit the whole population.

My thinking on these issues is particularly shaped by Oxford economist Paul Collier, who is here today. Collier points out that if we can help developing nations to make better use of their natural resources, the resulting fiscal flows could help societies to transform themselves for the better.

If developing countries can benefit from their minerals, the payoff could dwarf anything that aid might hope to deliver. Collier points out that in rich nations (where geologists have carefully surveyed the land) the typical square kilometre has subsoil assets worth US$114,000.

In all probability, the same is true for the developing world. On those figures, Africa’s natural resources would be worth $3.5 trillion, more than 70 times the amount of foreign aid it receives each year. Indeed, $3.5 trillion is probably an underestimate. In recent years, the petroleum frontier has shifted south from the Middle East to West Africa. Central Africa is rich in everything from gold to coltan (used in mobile phones). Southern Africa has bountiful reserves of precious stones.

To help developing nations make better use of their natural resources, a group of ex-politicians and entrepreneurs (working with academics like Collier) have proposed a Natural Resource Charter, which they hope will be adopted by governments, businesses and NGOs.

The Charter offers practical ways in which governments can ensure the people get a better deal. Australia financially supports the charter.

First, the Charter proposes that financial flows be fully transparent. As I’ve noted, mining generates relatively few jobs, so what happens to the royalties is critical. Through the Publish What You Pay campaign and the Extractive Industry Transparency Initiative, mining companies (such as the estimated 230 Australian mining companies currently operating in Africa) are encouraged to release information about the payments that they make to governments.

Australia is committed to promoting anti-corruption activities internationally. We are a supporter of the UN Conventions against Corruption and of the OECD Conventions on Combating Bribery of Foreign Public Officials and Guidelines for Multinational Enterprises.

Australia is involved in the Anti-Corruption Initiative for Asia and the Pacific, and financially supports the Extractive Industry Transparency Initiative. This enables citizens to pressure governments into spending the money on much-needed infrastructure, such as hospitals, schools and roads.

I stress that we should apply initiatives such as this practically, collecting information to ensue transparent governance, while acknowledging that resources belong to entire nations and wealth is spread accordingly. We must make sure that governments and their people are in the best position to benefit from resource development through strong and transparent legislation, and adequately trained staff who apply regulations. It means ensuring communities are engaged throughout planning, development and closure; and governments are informed on how to best use revenues.

Second, the Charter argues that extraction rights should be sold by auction. Once a handful of bidders participate, it becomes difficult for them to collude, and the final price is likely to reflect what the rights are actually worth.

Collier uses the example of the UK, which was on the verge of negotiating a £2 billion deal to sell mobile phone spectrum when it was persuaded to try an auction instead. The auction raised £22.5 billion. His pitch to developing countries is simple: ‘if the UK Treasury can get it wrong by a factor of ten, what makes you think you’ll do better?’. As an economist, I firmly believe that where there is uncertainty about the value of an asset – such as a greenfields mining licence – an auction is the best way to ensure that it garners a fair price.

Australian history points to the importance of fairly allocating natural resources. In a recent article in the Journal of Economic Perspectives, Daron Acemoglu and James Robinson compare the Australian experience of gold prospecting in the nineteenth century with that of Sierra Leone’s alluvial diamonds in the twentieth century. By allocating mining rights in small lots, Australia spread the ‘lottery’ of mining, and created a pro-democratic force. By contrast, diamonds in Sierra Leone were exclusively mined by the Sierra Leone Selection Trust, which had its own security force. They argue that ‘The scene was set for the creation of one-party and authoritarian rule after independence in 1961.’

Third, the Charter suggests that developing country governments should maximise the amount of information about the country’s subsoil assets. If governments or aid donors conduct geological surveys and make them publicly available, then the people of that nation are more likely to get a fair share of their natural resources. One way the Australian Government has sought to achieve this is by establishing the International Mining for Development Centre at the University of Queensland and the University of Western Australia, A core aim of the Centre is to improve the quality of geological surveys in developing nations.

Another way to increase information is to require that auction winners begin prospecting within a fixed period of time. If one miner strikes it lucky, this will raise the sale price when nearby parcels are auctioned off.

The sustainability program receives support at the national and state level by the Ministerial Council on Mineral and Petroleum Resources and by the Minerals Council of Australia.

This complements the International Council on Mining and Metals’ Ten Principles for Sustainable Development, with which many of you will already be familiar.

We don’t have all the answers, but we’re keen to be part of the conversation.

This includes working through the Australia-Africa Partnership Facility, Australian Development Scholarships and Australia Africa Fellowships program, supporting the establishment of the African Minerals Development Centre to help build capacity in governments and institutions across that continent.

We also have a strong focus on helping the world’s mining industry improve its safety record. Mining is hazardous work, and too many people have died worldwide extracting natural resources.

Our efforts in this regard include the Australia-China Coal Mine Safety Demonstration Project, which showcases mine safety technology and adopts leading practices to minimise mine injuries and fatalities.

Australia stands willing and able to help other countries however we can, whether through efforts to improve the lot of Indigenous communities, ensure protection of the environment and worker safety, or improve governance.

But we can achieve nothing without cooperation and communication within and between the global mining and development sectors. That is what makes events such as this and the upcoming Extractive Industry Transparency Initiative conference so important.

I encourage you to follow up with AusAID and the Department of Resources, Energy and Tourism to learn more about Australian efforts that interest you.

With your help, we can turn the old resource curse into a new resource blessing, and ensure that mining boosts living standards around the globe.

Update: Thoughtful reports on the conference from the ABC PM program and the Canberra Times.