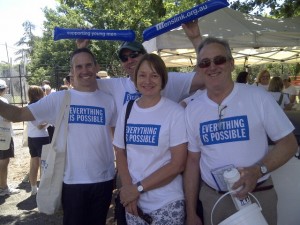 I spoke in parliament today about Canberra charity Menslink.

Last week I was part of a local team that helped to raise funds and awareness for Menslink at the Prime Minister's XI cricket match at Manuka Oval. Menslink is a Canberra charity that provides counselling and mentoring services to young men. It recognises that while both young men and women suffer from anxiety and depression, the rates of young men who reach out for help are far too low. Only about half of all young men who need assistance reach out for it. There was an overwhelming response from the public to Menslink and a recognition of the important work that Menslink does. The crowd was asked to wear blue in support of Menslink and many did. As a result of more than 100 volunteers who worked the crowd at Manuka oval, six new volunteer mentors have become involved. Four young men and their families have made contact with Menslink and the charity raised almost $5,000. The main purpose of Menslink's involvement on the day was to raise awareness, but it was pleasing that a number of corporate sponsors and individuals pledged further support for Menslink in the future.

Menslink was founded by Richard Shanahan in 2002. It takes a strengths-based approach rather than focusing on what is wrong with young men. It identifies and works with positive resources and abilities so young men can move their life in a more positive direction. Silence is Deadly is one program coordinated by Menslink in partnership with the Canberra Raiders where players go to local high schools and share their stories with young men to send the message that not reaching out or speaking to someone can be deadly. There is also a mentoring program. People like my friend Tony Shields work in partnership with young men to talk to them about their life choices. As Menslink CEO Martin Fisk says, 'For young men who go through Menslink, the only statistic I want them to have is as a taxpayer.'

I want to give special mention to some of those who helped on the day: Michael Aicholzer, Scott Cassidy, Elias Hallaj, Glenn Cullen, Graham Hannaford, Shane Horsburgh, David Mathews, Sandra Marie, James Milligan, Fergus Nelson, Rob Regent, and Margaret and Ian Watt. I also thank Martin Fisk and Scott MacFarlane for inviting me to be part of the Prime Minister's XI Menslink team. Menslink fulfils a vital role in supporting the young men of Canberra. If anyone would like to offer assistance to Menslink or reach out for the help they provide, please contact them or my office.