It is always a pleasure to have your work quoted in the great Houses of Parliament and it was a real pleasure for me today to have my work quoted more than once by members of the government! I had a brief moment of thinking, during question time, that the government had done some original research. But, of course, that was a little dashed when I turned to the 'Cut and Paste' column of The Australian, which is clearly providing the government's talking points now. It is government by Cut and Paste. It is a column which, I understand from friends at The Australian has really gone downhill a little since Nick Cater stopped editing it.

The question of consistency in one's public utterances is naturally a question that voters turn their minds to. The question that voters naturally have in their minds, when asked why a parliamentarian has changed their view on an issue is: have they done so for good policy reasons or merely for political reasons? In this place on 18 November 2013 I spoke about this issue in the context of emissions trading. I listed, then, the raft of comments by members, from the weathervane Prime Minister down, who had changed their views on emissions trading schemes to match the one-vote margin in the Liberal Party room.

Today I draw the House's attention to comments made during the last parliamentary term. These are not comments made by someone writing in a newspaper while they were back at university; no, these are comments made by members of the coalition when they were seeking high office. On 16 May 2013, the then Leader of the Opposition—now the Prime Minister—said:

On 14 March 2012, Mr Abbott said:
What you will get under us are tax cuts without new taxes.

On 16 August 2011, Mr Abbott said:
… there can be no tax collection without an election.

On 4 August 2013, Mr Abbott was asked by Mark Riley:
But aren’t you going to have to increase taxes yourself?
Mr Abbott replied: No. We are going to get government spending under control.

On 25 August 2013, the Prime Minister said:
… no country has ever taxed its way to prosperity.

And on the Today show on 3 February 2013, Mr Abbott said:
Personal income tax will be lower under a coalition government in its first term than it is now…

In a doorstop interview on 20 November 2012, Mr Abbott said:
We are about reducing taxes, not increasing taxes. We are about getting rid of taxes, not imposing new taxes. Asked by a reporter, 'Is that a promise?' Mr Abbott replied: This is my whole reason for being in politics in the parliament.

The coalition's Real Solutions policy document said, on page 18:
We pledge to the families of Australia that we will never make your lives harder by imposing needless new taxes.

Those are just some of the many comments that Mr Abbott has made on taxation going right back to 2009, when he said: … there will not be any new taxes as part of the coalition's policies

These statements that I have read to the House are statements that were made by Mr Abbott when campaigning to lead this nation. They have now been cast aside like a child snapping up kindling for a fire. Mr Abbott was prepared to say one thing in order to win office but now he has entirely changed his view on taxation. And he is not even taking his own advice on being trustworthy. On 13 June 2013, Mr Abbott told Newcastle radio: Well, I can understand why just at the moment politicians aren’t much trusted because we’ve had too many politicians who say one thing before an election to win votes and then do the opposite after the election…

But that is precisely what this government has done. If this government had gone to the last election saying that they were going to impose the measures contained in the bills under consideration in the House then the Australian people could have considered that. We could have had leaders' debates in which the topic of increased income taxation was discussed between the Prime Minister and the then Leader of the Opposition Mr Abbott or between Chris Bowen and Joe Hockey. But we did not have that because the coalition was not up front with the Australian people about what they were intending.

And now we hear the weasel words as to what this tax increase is. As Sarah Ferguson said on 7.30: If it looks like a tax and sounds like a tax, it probably is a tax; unless you're the government, and then it might be a temporary deficit levy to help tackle the country's budget deficit.

The rabbit that is being debated before this House today is a rabbit which has been hopping around in front of the Australian people—and they are hopping mad about this particular rabbit. Of course, it is one of the rabbits that the coalition pulled out of the hat after the last election, after promising that the hat was empty. They promised there would be no surprises, no excuses, adults are in charge, it would not matter what the state of the books was, they would not break their pledges. But now they have broken their pledges to Australians. They have broken a pledge not to increase taxation; they have broken a pledge not to cut spending on education. They have broken a solemn promise not to cut spending on health and they have broken a solemn promise to Australia's pensioners. They have broken a promise not to get rid of more than 12,000 public servants and they have broken a promise to increase aid in nominal terms in every year under a coalition government. These broken promises are the reason why this budget is perhaps the worst received of any budget in recent history. It is the reason, as I noted in the Federation Chamber last night, that consumer confidence is in free-fall and retail sales have slumped. This is a budget that breaks promises, that does not reduce the deficit but in fact increases the deficit relative to what it was in the Pre-Election Economic and Fiscal Outlook, and unfairly targets low- and middle-income families.

As Peter Martin noted in The Age, 'I'd feel better about the budget if the people who designed it acted as if they understood it.' Over recent days we have had both the Prime Minister and the Treasurer show that they do not understand how the GP tax will affect people with chronic diseases. The Prime Minister, with the now infamous winkgate interview with Jon Faine, shows that he misunderstands when the HECS-HELP increases will kick in, and that has followed a range of episodes which have shown the government's lack of comprehension of its own policies, such as the government's inability to explain whether or not their proposed changes to section 18C of the Racial Discrimination Act would have caught someone like holocaust denier Gerald Fredrick Tobin.

Labor has serious concerns with the shabby and rushed way that this tax measure has been put together. It is not clear why it is shabby and why it has been rushed. It could be that that the measure was changed as a result of media leaks before the budget. This measure was originally proposed to kick in from $80,000 but, following public pressure, that threshold was raised to $180,000. Perhaps, too, the lack of a dedicated Assistant Treasurer working through the details has caused problems for the government. The finance minister has now been acting for some months as the Assistant Treasurer. As the shadow Assistant Treasurer, I am acutely aware of the lack of a government counterpart, particularly in this critical lead-up to a government's first budget.

One of the chief loopholes that is generated by this bill is the way in which it treats fringe benefits tax. That is a loophole that will allow wealthier taxpayers to avoid the tax increase while surreptitiously catching taxpayers who earn less than $180,000 a year. Because the FBT year and the tax year do not line up, the increase in income tax runs for three years while the increase in fringe benefits tax applies for only two years. So there is a nine-month period from July 2014 through to March 2015 and then again a three-month period from April to June 2017, at the end of the three-year period, in which the increase in the FBT does not apply. What is the practical effect of that? It is that there is a full 12 months in which people earning over $180,000 can shift their income into fringe benefits in order to avoid the increase in tax. The government was not wrong when it said that this was a temporary levy. In fact, for taxpayers who re-arrange their tax affairs it will last for two years, not three. That raises serious questions about the accuracy of the government's revenue forecasts. It is not at all clear that the government has taken into account this loophole in forecasting the revenue that this tax change will cause.

In addition to making it easy for high-income people to avoid the tax, the government appears to have designed the tax so that less well-off Australians may end up paying it too. The problem with the increase in the fringe benefits tax is that it will affect everyone, whether they earn more or less than $180,000 a year. The government sensibly increased concessions for those industries that currently enjoy them but there are plenty of Australians who receive fringe benefits who are not in those industries. So we end up in the curious position of having a tax that is supposedly designed to share the burden of the government's misguided budget but may in fact do the opposite. This may end up being less of a tax on those Australians who drive a Bentley or, dare I say, a Rolls-Royce, and more a tax on Australians driving a salary-packaged Commodore into their work car park. The opposition will use all the avenues available to us to investigate those implementation issues and we hope the government will be adult enough to take those concerns on board.

I want to conclude on the issue of equity, because the government has made much of the claim that, because of this increase in income tax, the burden of the budget is being shared equally across the community. I seek leave to have incorporated in Hansard modelling produced by NATSEM on the distributional effects of the budget in 2017-18. 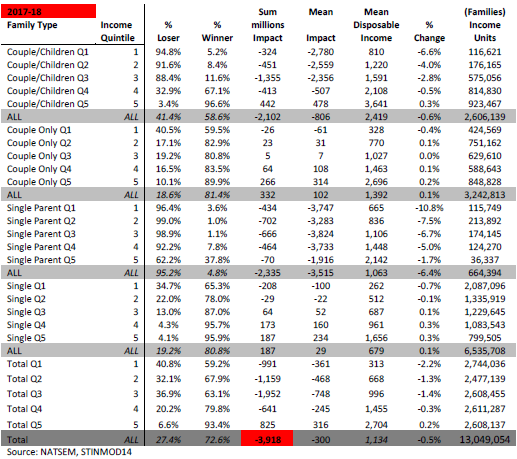 This is a measure which is atypical for this budget, because this is a budget whose burden falls upon the poorest Australians. Those Australians, of course, are disproportionately located in certain parts of the nation. I was in Devonport recently with Senator Anne Urquhart speaking with some of the communities there who will be especially hard hit. I am surprised that members of the National Party are not raising a greater outcry given that, for many people in National Party electorates, the incomes are lower than average and this is a budget that says that they should not be driving. In many of these National Party electorates, they do not have access to public transport, so they will be hit by the fuel excise change, they will be hit by the GP tax, and they will be hit by the withdrawal of benefits that will occur through this budget.

The distributional impacts of this budget are of deep concern to those of us on this side of the House. We shall continue to prosecute an evidence based argument against this budget, based on the fact that it breaks promises, that it increases the deficit and that it fails the fair-go test.