Opening of one-stop-shop in Braddon 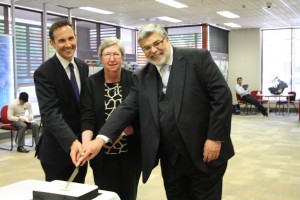 Today, Minister for Human Services Kim Carr and I opened the one-stop-shop for Medicare and Centrelink in Braddon. The co-location of these facilities means that the Braddon office is now able to offer additional services, such as Case Coordination which brings services together for vulnerable people.   It helps link people with services such as housing, health, crisis support, education and training, and family and financial support. The launch event also gave me a terrific chance to talk to some of the local staff about their work.

The media release is below. It has a great story in it about how Case Coordination helped out a local man to get assistance with housing and education.

A new Government service hub in Braddon will offer Canberrans a wider range of services in one location, including a trial initiative that provides tailored assistance to help people get back on their feet.

Minister for Human Services Senator Kim Carr and Member for Fraser Dr Andrew Leigh officially opened the one-stop shop today and announced the start of a new program to help the most marginalised in the ACT.

Senator Kim Carr said the Braddon hub was an example of a new approach to service delivery.

“We are centralising government services both for convenience and in order to provide comprehensive assistance for complex cases. The government can do more than just handing out payments,” Senator Kim Carr said.

The trial Case Coordination initiative provides tailor-made assistance.  It aims to match vulnerable people with a range of services that meets their needs.   It then helps link people with services such as housing, health, crisis support, education and training, and family and financial support.

“Canberra may be one of the most affluent cities in Australia, but it has its share of people doing it tough, whether through joblessness, homelessness or poor health,” Senator Kim Carr said.

“My Department serves all Canberrans – well-off or not – and I am pleased that everyone, particularly residents in the Inner North, will benefit from having Centrelink and Medicare, as well as Child Support self-service facilities, all under one roof.”

Senator Kim Carr acknowledged that the transition to a new location was not always easy, but said that, together with the ability to make claims online or at the doctor’s surgery, the changes brought significant benefits to the community as a whole.

“This new one-stop shop is one of the biggest of the Department’s service centres in the region. It serves 400 people a day and its staff play a big role supporting the local community,” he said.

Dr Leigh welcomed the new centre and also praised staff for the success of the new initiative to help people turn their lives around.

“Since Case Coordination was launched here in mid-September, staff have worked one on one with vulnerable people to help them tailor a plan for a better future,” Dr Leigh said.

“One person had recently arrived in Australia, spoke little English and was sleeping in his car. He was registered with ACT homelessness support service FirstPoint but had difficulty understanding staff over the phone.

“The Braddon Case Coordination team were able to liaise with FirstPoint on his behalf, and stayed in touch until they could secure private rental accommodation for him.

“They were also able to explain the bond assistance available through ACT Housing, and refer him to Interpreter Services so language would not be a barrier to applying for support.

“The man is due to start studying English in November.

“I’d encourage anyone in the local community to visit the new service centre to find out more about the support on offer,” Dr Leigh said.

Medicare, Child Support self-service and Centrelink services, including Case Coordination, are available at Braddon’s new one-stop shop at 13 Lonsdale Street from 8.30am to 4.30pm Monday to Friday. Disabled and metered parking is available in Lonsdale St directly in front of the Braddon Service Centre.