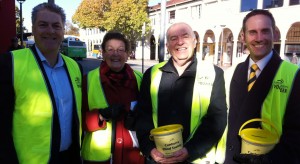 I was delighted to announce today that nominations for the 2012 National Volunteer Awards are now open. Head to www.notforprofit.gov.au/volunteering to nominate your favourite volunteer. More information is in the media release below.

Minister for Mental Health and Ageing

Dr Leigh said the Awards recognise the contribution of over 6 million Australians who volunteer their time in communities across the country.

“At times of great economic prosperity, it is easy to forget just how much our economy and society relies on the generosity of its people.

“Volunteering has its own benefits, through meeting people and contributing to the community, but we don’t thank our volunteers often enough. These awards provide recognition for the time and effort donated by volunteers in Canberra’s north.

“Here on the north side of Canberra it is the contribution of volunteers through groups like Pegasus Riding School, Parkcare groups and school P & Cs that are the backbone of our community,” Dr Leigh said.

Minister for Ageing and Social Inclusion Mark Butler said the Awards recognise the contribution of over 6 million Australians who volunteer in communities across the country, including for the first time a seniors category, as recommended by the Advisory Panel on the Economic Potential of Senior Australians.

“I’m pleased to see the Awards will now include a Senior Volunteer category to specifically acknowledge the invaluable contribution older Australians make to our community.”

Dr Leigh said 2012 National Volunteer Awards will call on Australians to nominate exceptional volunteers in their community who donate their time to assist not-for-profit organisations.

Nominations close on 8 November 2012 with an award ceremony to be held later in the year to celebrate the achievements of local volunteering heroes.

For information on application procedures and closing dates, contact Andrew.Leigh.MP [at] aph.gov.au, call Andrew Leigh’s office on 6247 4396 or visit www.notforprofit.gov.au/volunteering