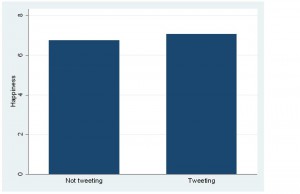 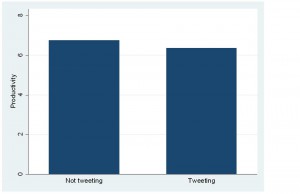 At the start of February, I began a randomised trial of twitter. I said that I was a twitter-sceptic, but plenty of people (including Louise, Joshua & Holly) had been pushing me to give it a go. So picking up an idea of Justin Wolfers, I decided to use a randomised trial to test whether twitter made me happier and more productive. I figured that if I was going to move a motion in parliament calling for more policy randomised trials, the least I could do was to experiment on myself.

The experiment worked like this. At the end of each day, I rated my happiness and productivity on a 1-10 scale, and then tossed a coin to decide to tweet the following day.

Yesterday, the 29-day experiment ended. Over the month, my average happiness was 6.9, and my average productivity was 6.5. Out of curiosity, I began by looking at how both metrics related to the two big shifts in my week: parliamentary sittings and weekends. Though the difference isn't statistically significant, the data suggests that weekends find me happier and less productive, while sittings find me less happy and more productive.

But how about tweeting? The graphs below show my average happiness and productivity on tweeting and non-tweeting days. It looks like tweeting makes me happier, but less productive. However, neither difference is statistically significant.

Sure, I hear you saying - but how does it look in a multiple regression? Well, the answer is not much different. Here are regressions that hold constant the weekend and parliamentary sittings effects.

Nothing's statistically significant, but the confidence intervals remain pretty tight, with the 95% confidence interval for the tweeting coefficient lying between -0.6 and +1 in the happiness regression, and between -1.4 and +0.6 in the productivity regression. While I wouldn't be sanguine about a daily 1-point hit to productivity, it doesn't look like tweeting does much harm (or good) to my output and life satisfaction. If you'd like to play with the data yourself, here it is in Excel format (or you can go to the raw data).

Add to that the fact that tweeting over the past month has brought a tad more attention to some of my speeches and writings, and a little frivolity to my life (did someone say #AusPolValentines?).

So I think that decides it. From now, I'm officially tweeting.