Speech to the Australian Orangutan Project 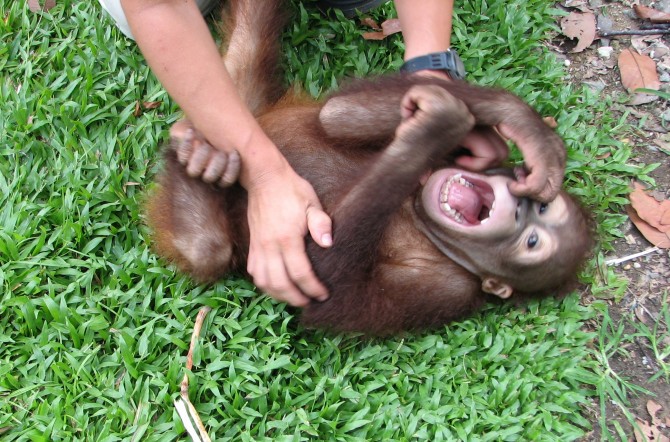 I spoke last night to the fundraising dinner of the Australian Orangutan Project.

I acknowledge the traditional owners of the land on which we meet tonight. I'd also like to recognise the real expert here tonight: primatologist Colin Groves. Thank you to Therese Lewis for the invitation to address this group.

It’s quite well known that great apes have an impressively sophisticated system of language.

Chimps, gorillas, and of course orangutans are all capable of communicating complex ideas to one another, and often to humans, through vocalisations and through body language.

For example, a gentle tap on another’s hand is a direction to stop. An invitation to play is expressed by a gentle bite, a somersault, a tug or the hair, or a raspberry.

Indeed, some of this behaviour doesn’t sound so different to Question Time.

When I received the very kind invitation from the Australian Orangutan Project to speak tonight, I thought I should read some more about the wonderful animals your organisation is working tirelessly to protect.

In doing so, I learnt that it’s not just ‘talking’ which makes orang-utans so special and so relatable.

Research findings don't just reveal how apes communicate  -  they also shed light on the origins of human speech millions of years ago.

It has been found that orangutans respond to being tickled with soft squeals – leading some researchers too suggest that this behaviour may be the ‘evolutionary root of human laughter’.

In Malay, orang means "person" and utan is derived from hutan, which means "forest”, so orangutan literally means "person of the forest”

We share a massive 97 per cent of our DNA with great apes.  Orangutans are highly intelligent and are able to reason through problems and use basic tools.

Orangutans have been observed making simple tools to scratch themselves. They also use leafy branches to shelter themselves from rain and sun, and sometimes even drape large leaves over themselves like a poncho.

They have also been observed using branches as tools during insect foraging, honey collection, and protection against stinging insects, and to “fish” for branches or fruit that is out of reach.

In Sumatra wild orangutans use tools to extract seeds from a hard shelled species of fruit. In captivity an orangutan was taught to chip a stone handaxe.

Orangutans can live for over 60 years, and that a baby orang-utan with spend at least the first 6  years of its life clinging to its mother while she searches for food – a challenge the parents here tonight may be able to sympathise with.

Such prolonged association between mother and offspring is rare among mammals. Probably only humans have a more intensive relationship with their mothers. Primatologists believe that orangutans have such long “childhoods” because there is so much that they need to learn before they can live alone successfully.

Young orangutans learn almost everything from their mothers, including: where to find food, what to eat and how to eat it (sometimes this involves using special tools), and how to build a proper sleeping nest. Also, mothers probably protect young orangutans from predators such as clouded leopards and pythons in Borneo, and tigers in Sumatra.

Reserachers from the University of St Andrews have found that orang-utans in were able to learn to exchange tokens to food, grasping the basic concept of trade. Two orangutans - Bim and Dok - who live in Leipzig Zoo, Germany, were especially good at helping each other.

Initially, they were given several sets of tokens, and learned the value of the different types.

An animal could exchange one type for bananas for itself, another type could be used to gain bananas for a partner, and a third had no value.

Initially, Dok, the female, was especially good at swapping tokens to get bananas for Bim, the male. Sometimes Bim would point at the tokens to encourage her.

But he was less interested in trading tokens that would win bananas for her. As she became less willing to help him out, Bim responded by trading more and more, until their efforts were more or less equal.

Apparently, this research marks the first evidence of "calculated reciprocity" in non-human primates.

But it seems the most amazing characteristics are apparent when orang-utans are living in their natural environments. Earlier this year, a team of anthropologists in the UK found that orangutans have the ability to learn socially, and to  and pass lessons down through generations — evidence that culture in humans and great apes has the same evolutionary roots.

We know that, with humans, certain behavioural innovations tend to get passed down from generation to generation through generation. This trans-generational teaching and learning is the basis for the cultural development of a society, and it used to be considered one of the key factors that differentiates us from other animals.

About a decade ago, however, biologists observing great apes started noticing variations in behaviour based on geographical differences. This suggests that the apes were passing down certain innovations, just as humans do, creating distinct sub-cultures within ape communities.

In parts of Borneo, for example, orangutans use handfuls of leaves as napkins to wipe their chins, while orangutans in parts of Sumatra use leaves as gloves, helping them handle spiny fruits and branches, or as seat cushions in spiny trees.

Traveling around the forest and obtaining food is the main activity that orang utans engage in during the daytime. Some time ago it was suggested that they memorise knowledge of their habitats – and use this knowledge for travel, like a map.

They travel by swinging and often use the back-and-forth oscillation of the tree until they can catch another tree.

Deciding and following a potential route through a multitude of trees is a very difficult task. This is especially true for males who are quite heavy – the choice of a wrong tree would result in a fall and serious injury.

So to be successful in their travels they need to take the right decisions about which trees to use and which ones to avoid, pointing to a clear ability to plan ahead.

Yet disturbingly, there are fewer than 50 000 Bornean orangutans left in the wild today, and less than 7000 Sumatran orangutans.

Felling of forests for crop development, as well as degradation stemming from fire and drought, means that the habitat of the orangutans is rapidly diminishing. Left unchecked, extinction in the wild is likely in the next 10 years for Sumatran Orangutans, and not longer after for Bornean Orangutans.

It’s heartening to know that organisations such as the Australian Orangutan Project are doing so much for this worthy cause, though supporting orangutan conservation, rainforest protection and reintroduction of orphans in order to save the species from extinction.

The work of the Australian Orangutan Project also has a great many flow-on effects that both protect other Critically Endangered Species, like Sumatran tigers, elephants and rhinos, while working with the as indigenous communities in the remaining rainforest in Borneo and Sumatra.

So I’d like to thank the Australian Orangutan Project for inviting me tonight – you’ve brought a fascinating creature to my attention, and you’ve alerted me to the real challenges that they face. Congratulations on your achievements to date and I wish you the very best with your continuing conservation efforts – your hard work and passion for this cause is inspiring.


Thanks to Claire Daly for her assistance preparing the speech.