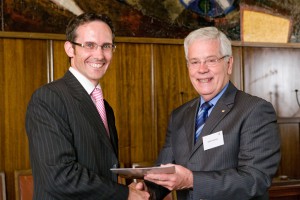 The 'new fellows' induction into the Academy of the Social Sciences in Australia on Tuesday was a fascinating affair, conducted in the Harry Potter-esque surroundings of ANU's Great Hall. I particularly enjoyed the chance to re-connect with my former politics teacher Lisa Hill, who works on compulsory voting and Adam Smith.

And in an interesting coincidence, it turns out that because ASSA was formed in 1971, I'm the only current fellow who's younger than the Academy. (A fact that's sure to be overturned soon, but I'll enjoy it while it lasts.)
Do you like this post?
Tweet