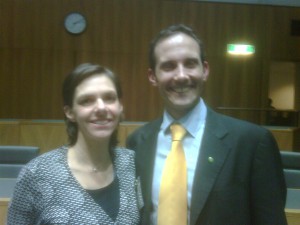 I was proud tonight to launch Jemma Purdey's fine biography of the late Herb Feith. We had around 120 people in the Main Committee Room at Parliament House, which was testament to the number of people Herb's life touched.


I begin by acknowledging the traditional owners of the lands on which we meet today, and thanking those who have worked hard to organise today, particularly Louise Crossman and Nik Feith Tan.

Jemmy Purdey, family and friends of Herb, internationalists all – thank you for coming today to celebrate Herb’s life and Jemma’s fine book.

Let me begin with a story.

When I was in grade six, the teacher asked our class to do a history project. The aim of the project was for each student to do their own primary research. Some students interviewed their grandparents. Others wrote about how their suburb had developed. One student wrote a history of the Holden Commodore.

I interviewed Indonesian-Australians about the mass killings of communist sympathisers in Indonesia in the mid-1960s. My assignment wrote about the terror of neighbours using the purge as an excuse to settle scores, about bodies floating down rivers, and about how Australian Prime Minister Harold Holt noted with satisfaction that 500,000 communist sympathisers had been ‘knocked off’.

To this day, I still wonder what my teacher made of it.

Looking back, I don’t remember precisely how this topic came about – but I have a feeling that my parents Barbara and Michael (who are here tonight) might have had something to do with it. It wasn’t just that we lived for a year in Malaysia and another three years in Indonesia – it was also that ours was a household where batik shirts were normal, where Far Eastern Economic Review and Inside Indonesia sat on the coffee table, and where we talked non-stop about ideas. I thought of my childhood when I read in Jemma’s book an account of a Feith family holiday:

'Dad’s in a gay mood and we’re all having a merry time. There have been plenty of discussions too. Mum and Dad have been reading an extremely interesting work by Martin Buber on Jewish Mysticism and that’s been one of our many topics of conversation … then we’ve had a few more battles on the old subject of whether morality is prudential and relative or absolute … By and large I think we’ve managed to keep off politics.'

Reading Jemma’s splendid biography of the great Herb Feith, I feel like a movie extra watching a blockbuster. (Look, there I am – behind the potplant!)

Herb’s friend Lance Castles – who crops up so often – was our next door neighbour in Banda Aceh. I remember Herb staying with us in Jakarta in the early-1980s. And it was Herb who encouraged my father to do his PhD at Cornell rather than ANU – opening my eyes to the chance that I might also study in the US, where I ended up meeting my wife Gweneth.

Incidentally, I can’t help noting that Herb and Betty met on the tennis court, the same place that my grandparents met. This struck me as coincidental until I realised that both Betty and my grandparents were Methodist – and when you don’t drink or dance, it rather cuts down the possible venues at which you might meet someone of the opposite sex.

Herb Feith was larger than life in so many ways. As a child, he would bend down – looking at you with his penetrating brown eyes – and ask serious questions. When someone made a joke, he would always be the last one still laughing. There’s something appealingly vulnerable about this – I noticed the other day that the Dalai Lama does it too.

And Herb was fabulously eccentric. Jemma notes that he became a vegetarian in the 1970s, but her book doesn’t mention a crucial fact: because he was making the choice for political reasons, he still ate chicken bones. As a child, I distinctly recall watching with wide eyes as Herb said ‘well, if you’re not going to eat those bones, I’ll have them’, and then devouring the bones.

Herb’s most famous achievement was to pioneer a volunteering scheme that has now become Australian Volunteers for International Development, sending more than 10,000 volunteers to developing countries in the past 60 years.

From a young age, Herb helped others. In high school, he went door-to-door collecting for war-ravaged Germans and other Europeans. With his friends from the Student Christian Movement, he collected for the Christmas Bowl appeal – perhaps causing his Jewish mother to raise an eyebrow.

While still at Melbourne University, Herb wrote to both the Indonesian and Australian governments suggesting that a voluntary technical assistance scheme, building on the goodwill of the Colombo Plan, might be a good idea. His own secondment in Jakarta to the Indonesian Ministry of Information showed that it was possible for an Australian to work in such a position. Back home, the Student Christian Movement – and subsequently the National Union of Australian University Students – were strong supporters.

In the end, the momentum for the scheme was overwhelming. Jemma recounts the story of Don Anderson – newly returned from seeing Herb at work in Indonesia – giving a speech in Canberra to an audience that included Robert Garran and Robert Menzies. Menzies is reputed to have muttered to Solicitor General Kenneth Bailey ‘How much will it cost?’. A figure was made up on the spot, and turned out later to be roughly accurate. In 1952, the Australian and Indonesian governments signed the agreement that formally created the scheme. Herb was then aged 22.

Yet there were still challenges.


There were also the challenges that Australians today still feel when going to a developing nation – whether to give to beggars, how to develop genuine friendships with local people, the feeling of being overwhelmed at the scale of the challenge, and the sense of what Herb once called ‘whitelessness’.

And yet, there really is an ‘Australian model’ of volunteering. Jemma tells the tale of Herb and some early volunteers joining a group of American volunteers on a day-trip to Bogor. While the Americans drove, the Australians and Indonesians piled together into a local bus. When they arrived, the Americans had brought an elaborate picnic, including tablecloths. The Australians had a simple meal of rice and vegetables, wrapped in banana leaves. It brought amusement from the Indonesians who joined them, but it was symbolic too. As Herb wrote in 1954, ‘these young people assert by the way they live, that racial equality is real. By having natural and friendly relations with Indonesians on the basis of mutual respect’. Indeed, Herb’s subsequent PhD thesis was dedicated to his friend Djaelani, a Jakarta servant who lived in one of the city’s many slums. Jemma’s account of Herb’s early days in Indonesia should be compulsory reading for every young Australian setting off to volunteer in a developing nation.

The other big theme in the book is the value of individual liberties. Jemma recounts Herb’s early years growing up in a Jewish family in Vienna. At the age of seven, his mother held him up to the apartment window to watch the city’s synagogues burn – the infamous Kristallnacht. During his life, Herb spoke out against anti-Chinese and anti-Communist attacks in Indonesia, against the hanging of Ronald Ryan, against apartheid in South Africa, and against the Vietnam War. Protesting against uranium exports, he was kicked in the stomach by a Victoria police horse. As pro-Indonesian militias began to wreak havoc the day after the East Timor referendum, Herb held the hand of an elderly village woman and berated the Indonesian militia men who were threatening her. The same Herb who had looked out upon the fires of Kristallnacht six decades earlier now stood up to protect a woman who might otherwise have fallen victim to another ethnically motivated atrocity.

Herb was fundamentally right on issues of human rights. And he was probably correct to criticise some economists for devoting too little attention to Suharto’s repression of democracy (indeed, the same could be said of some China scholars today). Yet, I think that he perhaps underplayed the importance of economic integration in reducing poverty and infant mortality. Contrary to what ‘dependency theory’ suggests, rising incomes in developed nations are a boon, not a hindrance, to reducing world poverty.

Indeed, I would have loved to engage Herb on the issue of economic globalisation precisely because he was so strongly in favour of immigration – an issue close to my own heart. Among the maiden speeches of new members of the House of Representatives, one thing that stood out for me was that nearly every Labor member spoke warmly of the migrant experience, and the benefits immigration has brought to Australia. Perhaps it’s that we instinctively regard the Australian project as an international one. Maybe it’s that we tend to identify a little more with the misfit and the outsider. Whatever the reason, it’s one of the things that makes me most proud to represent the Labor Party.

And yet – as you might expect of a party formed to protect the rights of Australian workers – our history is far from unblemished. Jemma reminds us that one reason Australia only took 5000 Jewish refugees before the outbreak of war was statements like that of Labor Senator John Armstrong, who said in 1938 ‘I urge the Government to take steps to prevent the unrestricted immigration of Jews to this country’. Jemma also reminds us of the way that the White Australia Policy was used to rip families apart. Indeed, Labor Immigration Minister Arthur Calwell was shocked when the High Court ruled that he could not deport an Indonesian woman who had six children with her Australian husband.

It was injustices such as these that Herb sought to right. As he once said ‘it is the changeability of every situation, the fact that at every turn there is the opportunity to help in a way which however small appears in some way fundamental’.

The wonderfully energetic and eccentric Herb Feith died too soon. And yet with this splendid biography, his ideas, his energy and his passion for making a difference are there for many to see.

As Tony Reid wrote, ‘He seemed to know everybody worth knowing in Indonesia and what’s more to be loved by them in a way that opened every door… whenever I was in the field I had the model of Herb in my brain as the way it morally could and should be done’.

May this be so for many generations of Australian volunteers to come.