Speech: What do dating, dieting and sports statistics have in common?

This week I've been launching my new book 'The Economics of Just About Everything' with a series of public lectures around Australia. Here's the text from the Canberra launch, which was generously hosted by my old colleagues at the Australian National University:

WHAT DO DATING, DIETING AND SPORTS STATISTICS HAVE IN COMMON?

LAUNCH OF 'THE ECONOMICS OF JUST ABOUT EVERYTHING'

Can I of course acknowledge that we are meeting tonight on the land of the Ngunnawal people, and recognise their elders past and present. There are so many good friends present in the room tonight, but I wanted to particularly acknowledge Bob Gregory and Rabee Tourkey for putting this together, and Beth Lawton and her team for making tonight happen. It was an event whose boundaries continued to expand and I'm very grateful to all of them for allowing that.

This book, 'The Economics of Just About Everything' comes from being at ANU and having extraordinary colleagues. I see many of them here around me in the room today, and in some sense this is your book as much as mine because I had such interesting and productive collaborations with many of you.

As Bob said, the book is  'The Economics of Just About Everything', and when I mentioned this to my seven-year-old son, Sebastian, he said: 'Has it got dragons in it?' Sadly, I had to say: 'No, it doesn't have any economics of dragons.' And likewise, it doesn't have anything on the economics of Liberal Party leadership, or indeed on Labor Party leadership. But there are other contributions that you'll have the chance to read about. 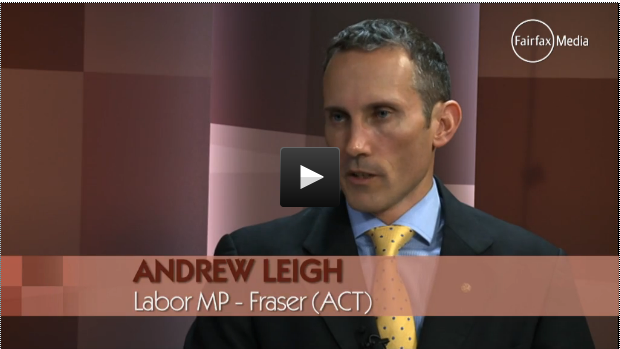 Inequality: should developing countries be worried?

I recently sat down with Jonathan Pryke from the Development Policy Centre to talk about inequality and how developing countries can manage this important challenge as their economies grow. Here's a quick summary, but you can also listen to the full discussion here:

Inequality: should developing countries be worried? An interview with Andrew Leigh MP

by Jonathan Pryke and Andrew Leigh

I began by asking Andrew why he sees inequality as such an important issue:

I think inequality is a public good… I’ve always liked the John Rawls Veil of Ignorance way of thinking about this, where he asks you to imagine what sort of an income distribution you’d want if you were in utero and about to be born into a society where you didn’t know if you’d be born into the top 5th or the bottom 5th. Would you want the kind of Australia where the top 5th has 62% of the wealth and the bottom 5th has less than 1% of the wealth? If you knew that there was an equal probability of you ending up in either of those two quintiles, would you maybe want a more egalitarian distribution of income?

Speech: Growth and diversity - how immigration creates opportunities and challenges for Australia and the United States

Overnight I gave a speech to the Progressive Policy Institute in Washington, DC, exploring how the increasing diversity of our communities creates both opportunities and challenges for Australia and the USA. Here's the full text:

Thirteen years ago, in summer 2001, I worked as a fellow here at the Progressive Policy Institute. Here I was lucky enough to co‑author reports on digital government and the digital divide, attended stimulating seminars by resident and visiting experts, and even helped put on an ‘Aussie breakfast’ of bagels and vegemite.

I knew Americans tend to be pretty self-assured, but even so I was particularly struck by the confidence that the Progressive Policy Institute had a fresh idea to contribute to just about every policy conversation in this city – and you were right! Like a Gaul in Caesar’s Rome, I drank it all in.

Think-tanks play a vital role in our democracy. Located at the intersection of academia and politics, you help to make university research accessible, and forge new policy proposals based on the best available evidence.

The Progressive Policy Institute (with, at that time, the Democratic Leadership Council) has played a special role. After Democrats lost Presidential elections in 1984 and 1988, your organisations were crucial in reclaiming the notion that governments could lead from the ‘radical centre’.

You showed that a belief in tackling poverty and inequality could best be realised by a commitment to open markets, a culture that fostered entrepreneurship, a commitment to strong economic growth, and rigorous evaluation of social programs. You reminded progressives that values must come first.

This article on Australia's gun buyback program was syndicated by Zocalo, and appeared in various outlets, including Time magazine and the Huffington Post.

Sometimes a tragedy is so awful that it changes the national debate. The 1996 Dunblane school shooting in Scotland, 2001 terrorist attacks in the United States, and the 2011 Norwegian gun massacre all prompted an outpouring of anguish and a demand for changes in law.

In Australia, that moment was the 1996 Port Arthur massacre, in which a gunman killed 35 people at a tourist attraction in Tasmania. To put the size of the death toll into perspective, the United States population is 14 times larger than Australia, so the impact of the Port Arthur massacre on Australia would be like a U.S. shooting that cost more than 400 lives.

The Government gave $13 billion to firms with rising earnings