At the Interchange General Practice—a local general medical practice in the heart of the nation's capital—patients, friends and even staff have spent the last several months knitting blankets in the centre's sitting area as they wait to see their doctor. These beautiful hand-knitted blankets are the work of hundreds of people and were recently donated to Palliative Care ACT. Dr Denise Krause, a member of the Interchange General Practice who has lived and worked in Canberra for more than 30 years, spoke of this wonderful initiative in the following terms. She said:

You can see that many hands have worked on these blankets, each person has contributed a little time and effort to make something beautiful for a person at the end of their life. 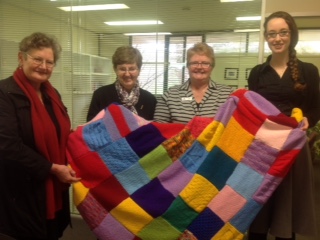 (click image for a link to a video of the speech)

I have observed in the past that Canberra has cemented its place in Australia as not just the nation's capital and the bush capital but also the social capital. Canberrans are more likely to join, volunteer and give than people in other parts of Australia. This simple act of kindness shows that the patients and staff at the Interchange General Practice are building the nation's social capital.

Hundreds of knitters have contributed, a few rows or many squares, which are then sewn together into colourful blankets for people who are being cared for by Palliative Care ACT.

She said, 'It is so gratifying to walk out to the waiting room and see people knitting away.'

Lincraft Canberra Centre has generously supported the knitting circle by providing wool and knitting needles, and even crochet hooks for those who do not knit. Dr Christine Phillips said that the knitters came from all backgrounds. I quote:

You can see how proficient some of the knitters are … they often say when they come in that they hadn't noticed how long the wait was.