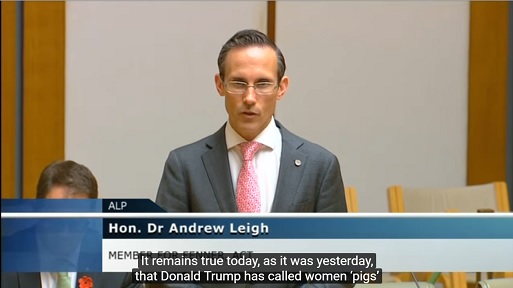 In the 240-year history of the American republic, no candidate has ever before been elected president without previous military, executive or legislative office. Elections determine power, not truth. It remains true today as it was yesterday that Donald Trump has called women ‘pigs’ and has made fun of a reporter with a disability. He has advocated a ban on Muslim migration and has called Mexicans criminals and rapists. He has claimed that President Obama was born in Kenya and only admitted to Harvard through affirmative action. He has dismissed an American born judge as a ‘Mexican’ who would not fairly hear his case and attacked the parents of a Muslim soldier killed in action.

As Nick Kristof, the New York Times columnist, noted summarising Trump's behaviour over four decades, 'I don't see what else to call it but racism.' These remain facts and those who say that the people in Australia should refrain from stating these facts are effectively saying that when someone is powerful, we should not call out sexism and racism. It was reasonable for those on the other side of the House to describe Mr Trump as 'terrifying', 'kind of weird' and his comments on women 'loathsome'. And those who made these comments should not now refrain from them.

What should progressives do on the day after a Trump victory? A temptation is to retreat but it is vital to remember that reform is two steps forward, one step back. As the great American Martin Luther King once wrote, 'Darkness cannot drive out darkness; only light can do that. Hate cannot drive out hate; only love can do that.' The great American Martha Nussbaum wrote that many of those who transformed their countries have drawn on the ethic of love including Jawaharlal Nehru, Franklin Delano Roosevelt, Nelson Mandela and Vaclav Havel. As the great American Barack Obama once put it, '… whenever we exaggerate or demonize, or oversimplify or overstate our case, we lose. Whenever we dumb down the political debate, we lose.' And an increased partisanship cannot be met by increased partisanship.

Today is the day in which many progressives are naturally sad and angry, wishing to pull the blanket over their heads and retreat from political life. But I urge progressives to remember the words of another great American progressive, United States senator Cory Booker, who spoke about the politics of love at the recent Democratic National Convention. He concluded with a wry smile that 'love trumps hate'. Maybe not every day, but in the long run.