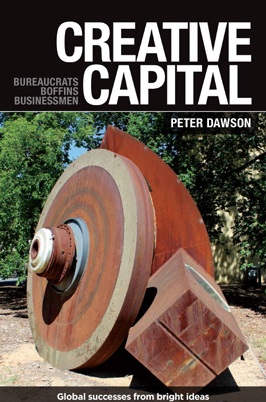 I wrote the foreword to Peter Dawson's terrific new book on innovation in Canberra. If you'd like to buy a copy, contact peter.dawson@pjdawson.com.au.

Ask a non-Canberran what words they associate with ‘Canberra’, and it’s London to a brick that they’ll come back with ‘politics’ or ‘government’. Yet as those of us who live here know, this is a city that’s considerably more than the seat of government. If I had to devise a single notion that sums up smart bureaucrats, connected academics and innovative start-ups, it would be that Canberra is an ‘ideas city’.

But the book is much more than an absorbing collection of stories – it also draws out broader themes. One of these is to think carefully about our city’s place in the world. Some argue that in a ‘hub and spoke’ world, Canberra may aspire to be a hub. But the book also quotes Alex Zelinsky’s observation that it may be no bad thing to be a ‘spoke of Silicon Valley’. After all, Canberrans tend to have a bevy of international linkages. I also appreciated the fact that Peter Dawson resisted using the term ‘world class’, a cliché most often used to describe things that are not.

Flattery, the psychologists tell us, works best when it appeals to the fragile side of a person’s character. We’re told to compliment the intellect of the handsome, and praise the grooming of the nerd. In the case of Canberra, many of us are used to thinking of it as a city of government. So it’s particularly flattering for locals to have Peter Dawson praising Canberra’s entrepreneurial flair.

The typical Canberran might well know about CSIRO’s success in developing wi-fi, a bestselling diet book, printable solar cells and a vaccine for the Hendra virus. But Peter Dawson goes beyond this to tell the stories of commercial entrepreneurs Adrian Faccioni, who developed GPS devices for sportspeople; and Glenn Keys, who created a medical practice that helped save the life of former Timorese President José Ramos-Horta. He describes Scott Rashleigh’s development of optical fibre, Ben Greene’s work on tracking space junk, and Marcus Daw’s work on carbon capture. In the military arena, we learn about Peter Moran (wearable computers), David Gaul and Ian Croser (radar) and Canberra firm X-Tek (body armour). The only thing missing are stories of a plethora of innovative Canberra women – perhaps something that can be redressed in the next edition.

Peter Dawson’s book made me proud to be a Canberran. But it isn’t just a puff-piece for the city. The book also raises the question of how policymakers should seek to foster innovation. Without advocating either model, it raises the question: should we follow Richard Florida’s advice, and create funky artistic precincts? Or is it better to do as Canberra entrepreneur Ben Greene suggests, which he says to government, ‘you take care of the schools and hospitals and I will take care of the rest’?

Much as I love hip downtown areas, the work of urban economists like Ed Glaeser has led me to doubt the claimed connection from Bohemian places to innovation. That’s not to say we shouldn’t encourage a groovy Braddon and a hip New Acton. But we should primarily encourage such developments because they make our city more enjoyable – not in the hope that they will make us richer.

To create more start-up firms in Canberra, it’s vital to boost educational outcomes. As the 2012 OECD PISA results show, ACT school performance has fallen in maths, reading and science over the past decade. Moreover, the drop has been at least as large as the average decline across Australia. Making Canberra schools work better must be a top innovation priority. It would also be terrific to see more students studying high-level maths and science at school, and taking on engineering and technology courses at university.

Canberra’s universities are already doing some fascinating work, but there are valuable lessons in Peter Dawson’s accounts of the early days the Australian National University: for example the focus on personnel over architectural blueprints. And as the stories of Howard Florey, H.C. Coombs, W.K. Hancock and Mark Oliphant illustrate, Canberra’s universities – at their best – can perfect the balance between theory and practice; between policy work and pure research.

Beyond getting education right, government should be modest about its ability to redress problems such as Australia’s comparatively low patenting rates (by OECD standards). To the credit of the Gallagher Government, it has trialled a variety of solutions, including the newly formed innovation space Entry 29. Like a good start-up in the private sector, it’s wise for governments not to think they have all the answers in solving a challenging problem such as the disconnect between Canberra’s universities and local businesses. Experiment, experiment, experiment.

Peter Dawson – and his wife Elizabeth – are immersed in Canberra’s social and intellectual life. But the story he tells has relevance outside the 2300 square kilometres that make up the ACT. Canberra isn’t perfect, but it’s a beautiful city in which to live. And as Peter Dawson teaches us, it has produced not just clever bureaucrats, but innovative boffins and creative businesspeople too.

Andrew Leigh is the Federal Member for Fraser and a former professor of economics at the Australian National University. His books include Disconnected (2010) and Battlers and Billionaires: The Story of Inequality in Australia (2013).