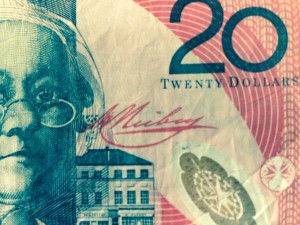 Today I delivered a speech in the House defending Labor's stimulus measures which saved Australian jobs over the course of the Global Financial Crisis and allowed the Australian economy to emerge relatively unscathed.

DR ANDREW LEIGH (Fraser):  I thought I might begin my contribution with a couple of important numbers. One is the figure on the total amount that will be saved as a result of the passage of this bill, the Tax Bonus for Working Australians Repeal Bill 2013.

Mr Chris Bowen:  How many million?

Dr LEIGH:  'How many million?' says the former and I hope future Treasurer of Australia, the member for a McMahon. The answer is not even one million; $250,000 will be saved by this bill which is taking up so much of the House's time—a figure around the salary of a member of the House of Representatives, or a little more than that. Other numbers are relevant to the debate. One of those numbers would be the total deficits over four years before the member for North Sydney became the Treasurer and the total four year deficits afterwards. Before the member for North Sydney became the Treasurer, the total for deficits over four years in the pre-election fiscal and economic outlook was $54.6 billion; afterwards, under the Treasurer's first budget update, $122.7 billion.

There has been a doubling of the deficit over the forward estimates under this Treasurer, a huge increase in the deficits—as a result of many of the decisions made by this government, such as the $9 billion grant to the Reserve Bank, such as the government not pursuing a crackdown on multinational profit shifting, which is recognised as a critical issue and an issue that will be the focus of the G20 finance ministers' meetings in Sydney next week. Yet, when the Treasurer has to do something about this issue, he runs away—he takes $700 million of sensible savings out of the budget, because when it comes to being tough, this Treasurer can only be tough on the weak.

It is the same story when it comes to transparency measures. When the Treasurer is faced with the modest proposal that Labor had put forward that we ought to publish the tax paid by some of Australia's largest firms in order to place some pressure on those whose tax bills seem to be a little smaller than they ought, the government has flagged that it intends to not pursue the measure. Sunlight is the best disinfectant, as Justice Brandeis once put it. But under this government the sunshine is being shut out.

The age of entitlement is ending for those of modest means. If you receive the income support payment, that will be taken away. If you are a low-wage worker, you will have the taxes increased on your superannuation benefits. But for those who are well connected, the age of entitlement is just beginning. If you are a high-income family, you will get $75,000 to have a child. If you are a well connected firm in Tasmania, you will have no trouble getting a tourism grant from this government. If you are a financial planner, you are going to be assisted in the scrapping of the best interest tests. If you are of high-income retiree then you have seen this government dump the plans to ensure that you pay a fair rate of tax. If you are somebody who is a fan of the Prime Minister's local footy club then you will be seeing assistance in terms of taxpayer handouts to redevelop Brookvale Oval.

So the age of entitlement continues for many, as the member for McMahon points out, it is yes to Manly and no to SPC. The bill before the House today is really making a political point with saving $250,000, but it does give us a critical opportunity, as the shadow Treasurer has noted, to talk about the benefits of the stimulus package built by Labor.

In Australia the stimulus helped avoid a recession and saved up to 200,000 jobs. And new research shows that stimulus may have also actually reduced government debt over time. Evidence from the crisis suggests that, when the economy is weak, the long-run tax revenue benefits of keeping businesses afloat and people in work can be greater than short-run expenditure on stimulus measures. That means that a well-targeted fiscal stimulus might actually reduce public debt in the long run.

I draw the House's attention to a memo put together by the Department of the Treasury analysing the impact of the fiscal stimulus titled 'The Treasury briefing paper for the Senate inquiry into the economic stimulus package'. That briefing paper notes very clearly how the stimulus package prevented recession. Make no mistake, had we not had Labor's timely, targeted and temporary stimulus package, Australia would have been plunged into recession. The pre-stimulus real GDP forecasts for 2008-09 and 2009-10 both had negative growth. It was as a result of stimulus that we saw employment, consumer confidence, growth and productivity increase.

These are outcomes that ought to go well beyond politics in this place. All of us in this parliament ought to care about growth, we ought to care about jobs and we ought to care about boosting productivity, and there is nothing pro-productive about a recession. It is a terrible loss of skills. It is so deeply demoralising for young Australians who find themselves leaving school unable to get a job. I saw this in graduating from high school in the teeth of the last Australian recession when unemployment went double-digit and for an 18-year-old school leaver it was near impossible to find a job. I saw mates of mine spending years looking for their first job.

Australia's fiscal stimulus package seems to have had a strong effect in cushioning the decline in employment caused by the global economic downturn.

You can see this also in an open letter signed by many, many Australian economists, which said:

We the undersigned economists are convinced by the evidence that the coordinated policies of the Australian Labor Government have prevented the Australian economy from a deep recession and prevented a massive increase in unemployment.

That is signed by Raja Junankar, Professor Harcourt, Peter Kriesler, John Nevile, Harry Bloch, the late Steve Dowrick, Roy Green, Elisabetta Magnami, Fiona Martin, John Quiggin, Michael Schneider, Roger Tonkin and many, many other economists. Time being short, I will not read all of their names into the Hansard, but the list represents many of the best economists across Australia.

Yet when crisis hit, we saw a lack of the bipartisan spirit which, one would hope, would have characterised a quick response to a global financial crisis. We saw on the 7.30 Report on 16 September 2009 Leigh Sales putting to the now Prime Minister that the OECD's estimate was that unemployment would be 1.9 per cent higher absent the stimulus package. To his credit, Mr Abbott said at the time:

There's no doubt that the stimulus package has helped in the short term.

But that was not the way in which he acted when the votes were on. We saw the Prime Minister being notably absent from the discussions over these economic matters and the Prime Minister had to apologise to then Chief Opposition Whip Alex Somlyay for missing five divisions on the night of 12 February, the circumstances of missing those votes being laid out in an article by Sharri Markson on 8 March 2009 in the Sunday Telegraph.

The stimulus package saved Australia from recession and all parliamentarians in this House should be proud of that success. For the government to now be playing political games, to be focusing on the final tail of stimulus payments—$250,000 of them—rather than the great success of the package itself is disappointing to me and I think ought to be disappointing to all members of this House. This was an extremely well-designed package.

There are still some countries in the world languishing with high unemployment rates and sluggish growth, and for them the tale of the global financial crisis is worse than the Great Depression itself. But we have learned a great deal from the experience of the failure of policy-makers to successfully confront the Great Depression from the too-late responses in Australia to the early 80s recession and the early 90s recession. As a result, Australia acted quickly in the case of the global financial crisis and to the great surprise of many avoided recession entirely.

Yet at the time, you had then opposition leader Malcolm Turnbull, the member for Wentworth, drawing on some extreme right-wing economists in the United States arguing that fiscal stimulus simply would not work, that people would cut back their demand in anticipation of future cuts. It was the 'freshwater school of thinking' and it simply is not borne out by the data. The fiscal stimulus was successful. The fiscal stimulus managed to save jobs and it should be a matter of great pride across this House. We should in fact have a motion from the Treasurer here commending the former government on leaving him with an economy in which the unemployment rate was below six per cent rather than above eight per cent, as some of the projections prior to the global financial crisis were suggesting. The social debt of unemployment with the debt of tens of thousands of small businesses gone to the wall would have resulted in hundreds of thousands of young people whose career earnings would have been permanently scarred. We know from the experience of past recessions that school leavers experience a hit not just temporarily with a period of unemployment but later on in their careers, and Australia has managed to avoid all of that thanks to a well-designed fiscal stimulus package. The household stimulus was important because it would get out there quickly, ahead even of the worst of the global downturn.

In my schools I will see education outcomes improve as a result of classrooms, such as in Amaroo School, where teachers can engage in team teaching through well-designed 21st century classrooms. I will see school buildings that are more environmentally efficient and allow the school to have assemblies together. Black Mountain School, a school which caters to children with disabilities, has a school hall that is suitable for children with wheelchairs and a stage where a kid with a wheelchair can now, for the first time, go on stage to receive an award with everyone else.

So that legacy of the infrastructure package is there right across Australia, in new roads, in new school building programs and in so many of the shovel-ready infrastructure projects. It is a legacy of infrastructure alongside a legacy of avoiding recession of which this House will be proud and of which I wish I would hear a little more from those in government.