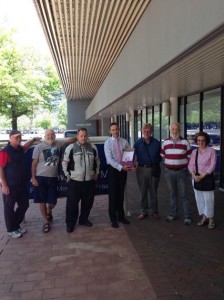 This afternoon I welcomed locals with NBN Defenders as part of  a National Broadband Network Day of Action. They presented me with a copy of the largest online petition this country has ever seen.

It urges the Abbott Government to abandon its broadband policy that uses fibre-to-the-node (FTTN) technology in favour of the superior fibre-to-the-premises (FTTP) option championed by Labor. The quarter of a million people who've signed the petition feel strongly, as I do, that the FTTP NBN will serve Australia’s long-term interests much better and deliver a more reliable network with faster speeds.

Latham resident and accountant Nikki Douglass handed me a box with the 270,000 signature petition collected through the website change.org.

“This is the most critical infrastructure project facing Australia right now and the public wants to see an increase in the amount of fibre-to-the-premises being rolled out,” Ms Douglass said.

"We’re sending a strong message to Communications Minister Malcolm Turnbull that he needs to start listening to the Australian people.”