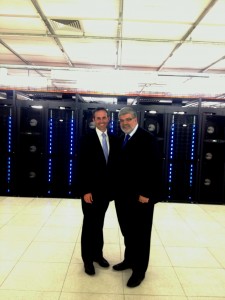 Australia’s most powerful supercomputer, which also ranks as one of the largest in the world will enable scientists to gain new and valuable insights into issues of pressing national importance like climate change, water management and earth science.

Minister for Innovation, Industry, Science and Research, Senator Kim Carr launched the new facility in Canberra today with Member for Fraser Andrew Leigh. Labor has supported the extraordinary machine with a $50 million grant under the Super Science Initiative.

Australia’s newest and fastest supercomputer is the centre piece of the new National Computational Infrastructure (NCI) facility at the Australian National University.

According to researchers at the University, it can perform the same number of calculations in one hour that 7 billion people armed with calculators could perform in 20 years. It has a capacity comparable to around 30,000 ordinary laptop computers working together as a single system.

The supercomputer is the result of the close collaboration between the NCI and Fujitsu.

The NCI will provide scientists with a number-crunching power of quadrillions of operations per second, and data storage measured in petabytes - which is millions of Gigabytes. It also features a high capacity data storage and cloud computing systems in a purpose-built, state-of-the-art data centre.

Launching the facilities, Minister Carr said the solutions to the big problems faced by Australia depend on scientists having the advanced digital tools to carry out their ground breaking work.

“This leap in computing power will give our researchers insights and solutions to problems at a rate far quicker than previously possible,” Minister Carr said.

“It keeps Australia at the forefront of global innovation and opens up new horizons for science and research.

Dr Leigh said the supercomputer was a national asset and one that would attract researchers from around the country and around the world.

“The amount of information available to researchers is rapidly increasing, and it takes a big computer to crunch big data. This supercomputer will allow researchers to solve problems that puzzle us today, and permit future teams of researchers to answer questions we haven’t even thought of yet,” Dr Leigh said.

Supported by the NCI partner agencies CSIRO, the Australian Bureau of Meteorology, Geoscience Australia, Intersect Australia and the Queensland Cyber Infrastructure Foundation, the NCI is a space for collaboration and a centre of supercomputing excellence that attracts scientists from around the world and the best and brightest in Australia.