Launching the State of Preventive Health 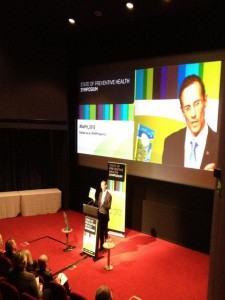 On behalf of Health Minister Tanya Plibersek, I launched the inaugural State of Preventive Health report.

Thank you very much Louise [Sylvan]. Can I, of course, acknowledge we’re meeting today on the traditional lands of the Ngunnawal people, and pay my respects to their elders past and present. I want to acknowledge Louise, Ita [Buttrose], David [Butt] who is here representing Jane Halton, as of course I am representing Tanya Plibersek. So, where this might in a parallel universe have been the Jane and Tanya show, it’s instead, I’m afraid, the David and Andrew stand-ins. But, what you get when you ask a former economics professor to launch a report is, I’m afraid, an irresistible opportunity to talk about the economics of preventive health. Because this is – from an economics perspective – truly a fascinating area.

Fundamentally, the way in which I see preventive health is as a time inconsistency problem. You think of ourselves now, and ourselves in the future, and the challenge with preventive health is getting ourselves now to do the right thing for ourselves in the future. I’d wager that there’s barely an Australian around who thinks that they wouldn’t be better off in the future if they didn’t speed in their car; who thinks they wouldn’t be better off in the future if they ate a little better; if they exercised a little more, and if they didn’t smoke. We all know that in the long run those things are going to be better, but in the short run for so many of us the cream bun prevails over the salad roll, the great TV show prevails over going to the gym, and for about one-fifth of Australians, the cigarette prevails over giving it up. And so this fundamental time inconsistency problem is the one that preventive health seeks to address.

Now politicians, temperamentally, have to be optimists. So I want to talk today about two successes and one failure in the preventive health area. Let me start with the successes. Tobacco has been a great success of public health. As you well know, cigarette smoking only really gets going in the late 19th century. It’s the Spanish and then the French who work out that tobacco will be consumed more readily if it’s wrapped in paper. (And you ask why French women don’t get fat; maybe the high smoking rates in that country have something to do with it.) So hardly anyone’s smoking at the start of the 20th century, but by the end of World War II you’ve got about half the population in developed countries smoking. And then in recent years, we’ve seen that come down rapidly. There’s been a number of drivers of that, the biggest has been price. Tobacco taxes have, to a large extent, helped to bring down cigarette consumption.

But we’ve also changed people’s knowledge about the link between cigarette smoking and cancer. One of my favourite economic studies looking at this area asks the question “why do more Europeans smoke than Americans?”. The answer is that Americans are more likely to believe that smoking will lead you to an early grave. That’s true even if you survey non-smokers in those two regions of the world. So public health campaigns have made an enormous difference. And then recently in Australia, we’ve gone further. Not just the public health campaigns, not just the taxes, but also putting in place advertising bans and now our world first plain packaging laws – which former health minister Nicola Roxon had the privilege of taking to New York to speak to a global health convention about. So tobacco has been a success.

Another great success has been road safety. Road deaths as a share of the population steadily rose as the automobile became ubiquitous in Australia in the post-war decades. But they peaked in the late 1970s and been trending down since then. Regulation has played a huge part. You’ll occasionally hear people talk about getting rid of red tape and getting rid of regulation, and we should do that where regulations are unnecessary.  But we should also never forget that the regulation that mandated that all cars should have seatbelts and that people should wear them or face a fine means that thousands of Australians are alive today who wouldn’t have been were it not for that regulation. The installation of airbags in cars has also seen many Australian lives saved, and the regulation that saw us put in place random breath testing in the early 1980s, decades ahead of many other countries, continued to save lives. Road safety is a great preventive health story.

But there had to be a cloud to the silver linings, and that for me is obesity. As you know, obesity has steadily been rising for the better part of the last half-century. Up until about 1970, the health economists tell us, that rise was caused by a shift towards more sedentary jobs. The shift from agriculture and manufacturing towards service jobs, desk-bound jobs, increased overweight and obesity up until about the year of my birth. But for the last 40 years, the rise in obesity is largely a technology story. We’ve seen the rise of the microwave, which makes it easier to prepare hot meals at home. The technology of vending machines has been important in allowing Australians and people across the developed world to have access to cheap snack food. And we’ve seen big advances in packaging technology . Thirty years ago, if you wanted a scrumptious jam cake you had to buy the ingredients and make it yourself; now you can wander down to Coles or Woollies and pick one up for less than $5. Those advances have seen the price of food fall, but they’ve also seen an increase in overweight and obesity. Two thirds of us - now overweight and obese, a quarter of Australian children. So therein lies the challenge, that we’re seeing steadily rising rates of obesity and here we’re fighting big technological shifts.

Preventive health is, I believe, an area where we need not only soft hearts, but also hard heads. It is certainly true that relative to many other countries, Australia has underspent on preventive healthcare. But that doesn’t by itself tell us that we ought to spend more. A famous study, of which I’m sure you’re aware, in 2008 by Joshua Cohen and co-authors in the New England Journal of Medicine pushed back against US presidential candidates who had noted US underspending on preventive health. They catalogued a range of preventive health interventions and found that many of them didn’t pass cost-benefit test. And you’ll see here, right in this report, work by Alan Shiell reviewing a range of public health interventions and finding that only about 40 out of the 120 passed a rigorous cost-benefit test. So we need that rigour in working out which preventive health interventions can work, which are going to be most effective. In the area of obesity, randomised control trials tell us that surprisingly, one of the best dieting tips turns out to be small plates. That simple heuristic that tells us to fill up our plate means that if you can cut your plate size from 12 inches to 9 inches, you’ll actually end up eating a whole lot less. Not eating in front of a TV works too, but doesn’t have as big a bang for the buck in randomised trials. So we need that rigour, and it’s that rigour that is in this fabulous, readable report.

I’d also like to point out the importance of combining a preventive health agenda with a health equity agenda. Michael Moore said to me just before I stood up, “you are going to say a little bit about health equity from your new book Battlers and Billionaires aren’t you?” I wouldn’t have spruiked my own book, but since Michael’s asked me to, it seems churlish not to do so. The two statistics that scare me most about health equity are the fact that if you’re in the top fifth of the income distribution, you live on average six years longer than someone in the bottom fifth of the income distribution. Six more Christmases, six more years to spend with your family, six more years to spend enjoying great movies. And the other is that if you compare the top and the bottom of the income distribution, you’ve got a difference of seven teeth. The rich have seven more teeth than the poor, an income difference that shows with every smile. And there are some preventive health measures which are unambiguously targeted at closing the health equity gap, smoking leading among them. But not every preventive health measure will help to close the health equity gap, and one of the things I love about this report, is it talks about the health equity issues alongside preventive health issues.

This is also a great report because it talks about the international context. We see statistics from around the globe, and I understand that this is feeding in to the global action plan adopted by the World Health Assembly in May of this year. There’s going to be more of this in future reports, and I think it’s absolutely vital to plug in to the international context.

There’s also a discussion of the partnerships, because we know that preventive health even more so than other areas of health intervention needs to have partnerships. Whether that’s education, business, industry, researchers, celebrities – and there I’ve only named the categories into which Ita falls. This is a vitally important area and it needs to engage other professions. My wife Gweneth is a landscape architect who recently put on an exhibition at the Gallery of Australian Design, looking at landscape architecture and public health. Simple questions like “if you have a neighbourhood which has footpaths, does that better encourage people to get out and take a walk after work?” There’s so many other professions whose work feeds in to a preventive health agenda. This is, in some sense, the most broadly ranging area of the health system, and I commend the authors and the work of ANPHA in bringing together so many different strands of a vital health agenda.

It is my pleasure to officially launch the State of Preventive Health 2013 Report, and I look forward very much to reading subsequent editions.