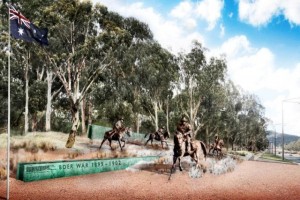 I MC'ed today a bipartisan event to boost public awareness of the proposed Boer War Memorial, which will hopefully soon be built on ANZAC Parade, in my electorate of Fraser. Here are my opening words.

The Boer War is – for many Australians – a forgotten war. It began before we were even a nation. The rights and wrongs of the war are less clear than in other conflicts. If asked to name one story about the Boer War, many Australians would likely name the movie Breaker Morant.

The Boer War was the Banjo Paterson was a Boer War correspondent for the Sydney Morning Herald and the Age, and after the war put his experiences to verse. In his ballad With French to Kimberley he described the young Australian soldiers so:

“And in the front the Lancers rode that New South Wales had sent:
With easy stride across the plain their long, lean Walers went.
Unknown, untried, those squadrons were, but proudly out they drew
Beside the English regiments that fought at Waterloo.”

One such young New South Welshman was Private William Abrahams of Bega. Private Abrahams was excited about taking part in the Boer War. He joined the Bega Mounted Rifles with a number of other young men from the district.

An enthusiastic correspondent, he wrote many letters home to his mother, his brother and sister, describing his journey to South Africa and his impressions on arrival.

In a letter to his brother and sister dated 4 December 1899, he wrote:

"We arrived in Port Elizabeth last night at about 9.30 and anchored there till this morning. (...) It is a very nice looking place, the town is close to the sea it would make a half dozen Begas."

Late in February 1900 he wrote to his mother describing a battle.

“We had a good battle last week called Paardeburg, we captured a laager (as we call a camp) of 3,400 Boers, and killed many more. We have had several small battles but not so large as Paardeburg.”

Sadly, a week after sending this letter Private Abrahams was killed.

One of Abrahams' comrades, Trooper Stewart of Wollongong, writing from Bloemfontein said:

"The young fellow who was killed in our company was named Abrahams and hailed from Bega. His death was due to abominable treachery, for while the enemy were holding up white flags in any number, a shower of bullets landed all round us, and one of them found its mark in the heart of this poor boy.”

The Boer War was a hard-fought conflict, with stories such as this one redolent of many of the wars since, including our involvement in Afghanistan.

An Australian soldier leaving his home for the Boer War in 1899 left behind a collection of colonies, and if he was lucky enough to return home at the end of the war in 1902 it was to a newly federated nation. While many things have changed since 1901, the universal tragedy of young men and women dying before their time remains the same.

Private Abrahams is one of the 102,730 Australians acknowledged on the Roll of Honour at the War Memorial. Hopefully soon his sacrifice will be recognised in this striking memorial.