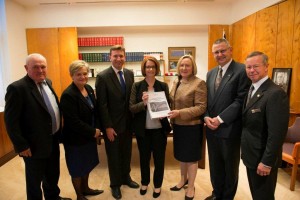 I spoke in parliament yesterday about the need to make the Barton Highway safer, ahead of a meeting the PM had with mayors and Labor candidate for Hume Michael Pilbrow.

Last week there was a head-on crash on the Barton Highway, between Yass and Murrumbateman. The drivers of both cars were hospitalised with critical injuries, and the single-carriageway highway was closed in both directions for several hours.

Thankfully, this incident did not claim any lives; unlike a similar head-on collision in February this year in which one of the motorists, an ACT resident, was tragically killed.

The Barton Highway is a part of the national highway system and a key link between Canberra and the national grid, and it is unacceptable that it remains so dangerous. The risks are only going to increase as traffic volumes build, because the Yass valley area is one of the fastest growing regions in New South Wales. For example, Murrumbateman has grown from having a population of around 350 in 1984 to some 3,000 today.

Thanks to pressure from my predecessor, Bob McMullan; Labor's 2007 candidate for Hume, David Grant; and locals, including Murrumbateman resident John Gelling, Labor devoted $36 million to roadworks to address a notorious danger spot, the Gounyan curves. This 4.5 kilometre section of improvements removed seven bends. It was my pleasure to officially open the improved section in November 2011.

Many locals still believe the Barton Highway should be duplicated. The Commonwealth would be prepared to consider a proposal for this, but at present New South Wales has not even listed it as a priority, which is disappointing, given that the National Party's member for Burrinjuck serves in Barry O'Farrell's cabinet—yet she is unable to get the road onto the New South Wales state government short-list for urgent action.

A strong campaigner for duplication of the Barton highway is Labor candidate for Hume, Michael Pilbrow. Like many people in Hume, Michael regularly travels the Barton Highway to attend meetings in Canberra. He sometimes travels the road with his children and he knows the risk it brings.

Every day over 6,000 people commute from the Hume electorate to the ACT. As a Canberran, I applaud Michael Pilbrow's activism. He is a candidate who lives in the electorate, who is raising his family there and who is working hard to address local issues such as the Barton Highway duplication. He is a candidate who would serve the people of Hume well in this parliament. I wish him and the local mayors the best in their efforts for improving the safety of the Barton Highway, and I wish Michael Pilbrow my personal best in fighting this election.