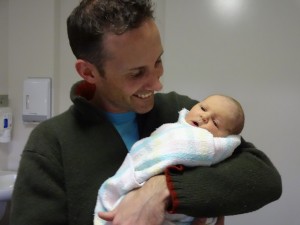 My latest Chronicle column is on parenthood.

Ever wondered why a calf can walk after a few hours, while a baby takes a year to learn the same skill? It turns out that the problem arises from two features of humans – we stand on two legs (which requires a small and bony pelvis), but also have large brains (which are hard to fit through that pelvis). Evolution’s solution to this problem is that all humans are born – in a sense – prematurely. After emerging from the womb, we need more protection from the world than do most other animals.

I’m typing this article one-handed, with a one month old boy asleep in the crook of my left arm. There’s something extraordinary about new life – its beautiful vulnerability and that unique ‘new baby smell’ that disappears all too quickly. Zachary is our third child, and we’ve gotten a few things right this time that we wish we’d done before.

First, when the baby arrived, we politely asked friends who thought of sending flowers to please instead make a donation to the charity ‘Send Hope – Not Flowers’. The charity was established by three young Canberrans - obstetrician Steve Robson, journalist Emma Macdonald and internet entrepreneur Alex Fahey - along with Sydney writer Julie Ulbricht. For the cost of a bunch of flowers, you can save the life of a mother in the developing world. The charity works with partner organisations in Papua New Guinea, Indonesia and the Solomon Islands, and donations can be made through their website: www.sendhope.org.

Second, I’ve really been relishing taking a bit of extra dad time with the children. A new baby is both exciting and unsettling for siblings. So the chance to kick a football or read a book with the two older boys has given them a bit of stability at what would otherwise be a chaotic time. Paternity leave isn’t so easy in my job, since no-one else becomes the Member for Fraser when I’m not at the office. But community organisations have been wonderfully understanding when I’ve told them I can’t attend an evening event because of the munchkins. Indeed, Zachary arrived only a few months before the commencement on 1 January 2013 of ‘Dad and Partner Pay’. The program will give eligible fathers and partners two weeks’ leave at the minimum wage (currently $606 a week).

Third, my wife and I are realising that the right answer when anyone offers help is ‘yes’. Family and friends are invaluable at a time like this, and we’ve been lucky to have a strong network of people around us. Some of our friends came through Gweneth’s mother’s group. These groups are coordinated by ACT Playgroups, which will celebrate its 40th anniversary next year. If you’re a new parent, I can’t recommend them highly enough.

But while we’ve learned a thing or two over the past five years, we’re still bumbling our way along – trying to work out the best way to raise our kids. It’s fun, it’s daunting, and it’s exhausting. It’s parenthood.

Andrew Leigh is the federal member for Fraser.