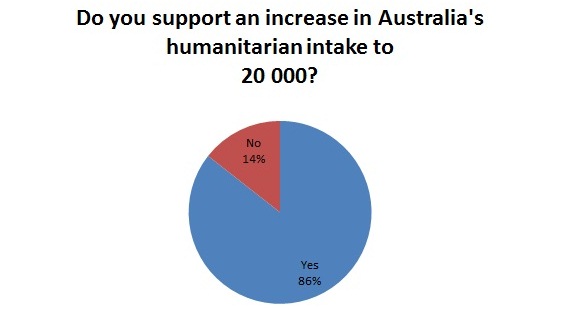 I recently did a survey on increasing Australia's humanitarian intake. The response was overwhelmingly in favour of Australia lifting the number of refugees we take, with 82% supporting an increase.

For responses from my electorate of Fraser (taken from postcodes supplied), this was even more encouraging with 86% in favour.

Canberrans might be interested to know the geographic breakdown of the responses. 90% of respondents from the Inner North were in favour of an increase, with 88% in Gungahlin and 80% in Belconnen / West Belconnen. There were 327 total respondents with 211 providing postcodes in the Fraser electorate.

For responses either from outside my electorate or not supplying a postcode, 76% supported an increase.

I was pleased to see today that the Prime Minister and Minister for Immigration and Citizenship announced that Australia will accept 20 000 refugees each year and that we’re accepting 400 refugees from Indonesia immediately.

I am now a Welcome to Australia ambassador and look forward to welcoming more refugees to my electorate and to Australia each year.