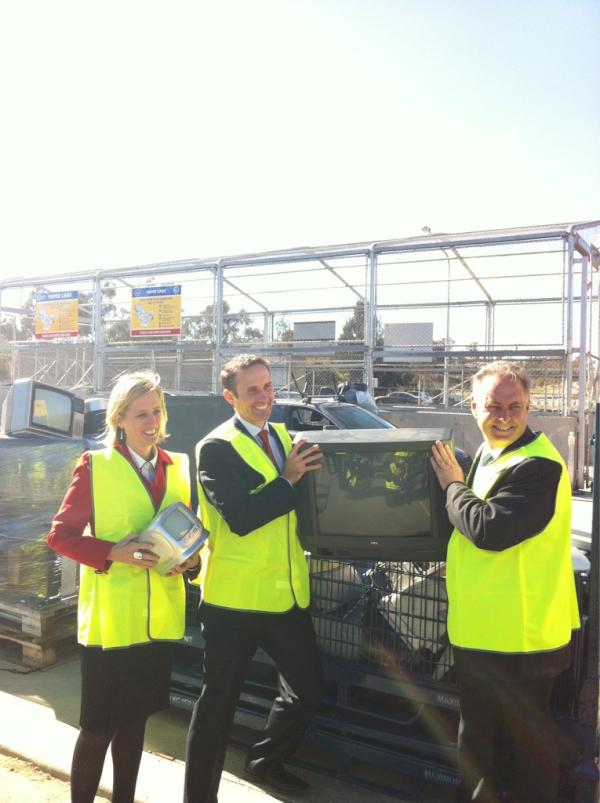 Today I joined ACT Chief Minister Katy Gallagher and Senator Don Farrell in opening the ACT's own National Television and Computer Recycling Scheme station. Technology is developing at such a rapid rate that what was state-of-the-art only a few years ago soon becomes obsolete, and now households can recycle their unwanted televisions and computers. See media release below:

Australia today celebrates a major milestone in waste management with the first services under the National Television and Computer Recycling Scheme opening for business in the ACT.

Householders delivering unwanted TVs and computers to the Mugga Lane waste transfer station in Canberra this morning were greeted by Parliamentary Secretary for Sustainability and Urban Water, Senator Don Farrell, and ACT Chief Minister and Minister for Territory and Municipal Services, Katy Gallagher.

“This is an exciting first step for this important initiative, made possible by the Gillard Government’s landmark Product Stewardship legislation,” Senator Farrell said.

“People dropping off their unwanted televisions and computers for free here today, and in the future, can do so with the knowledge that these products will be recycled in an environmentally friendly way.

“Hazardous materials contained in these products, including lead, mercury and zinc, will be prevented from entering the environment through landfill. Valuable non-renewable resources, including gold and other precious metals will also be reclaimed for reuse.”

The scheme does not cover other electronic waste, such as mobile phones, which are already covered by the voluntary recycling scheme MobileMuster.

ACT Chief Minister Katy Gallagher said Canberra is at the forefront of innovation in recycling and waste management.

“I am delighted that the ACT is the first jurisdiction in the country to implement the National Television and Computer Recycling Scheme,” the Chief Minister said.

“The new scheme gives Canberrans the opportunity to dispose of their televisions, computers and computer products, free of charge, in a way that greatly reduces the risk to the local environment by stopping these products going into landfill,” she said.

“It is also hoped the scheme will help alleviate some of the ongoing issues in the ACT around illegal dumping, especially around charity bins.

“It is likely the Mugga Lane and Mitchell Transfer Stations will be very busy in the first few weeks of the new scheme. The ACT Government encourages residents to consider holding their items for a while longer to avoid long queues, especially on weekends. The free e-waste recycling service is a permanent arrangement so there is no need to rush.”

Member for Canberra Gai Brodtmann said she expected the service to be well used.

“Canberrans are great recyclers and this new scheme will be a popular, quick and easy way for families and small businesses to dispose of their unwanted TVs and computers,” she said.

Member for Fraser, Dr Andrew Leigh, said technology is developing at such a rapid rate that what was state-of-the-art only a few years ago soon becomes obsolete.

“The faster our computers and televisions keep improving, the more important it is that we have a good recycling program for e-waste,” Dr Leigh said.

From today, the DHL Supply Chain services will operate from the Mugga Lane and Mitchell Transfer Stations, which are open from 7.30am to 5pm, seven days a week.

Further information on the scheme can be found at www.environment.gov.au/settlements/waste/ewaste/index.html

Further information about the scheme in the ACT can be found at http://www.tams.act.gov.au