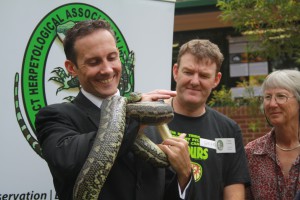 Today I opened the 'Snakes Alive' exhibition, an annual display of snakes and other reptiles and amphibians put on the the ACT Herpetological Association. As part of the opening event, they put a snake in my arms which was perhaps one of the more unusual experiences I've had since becoming a parliamentarian.

It's a fun event with lots of hands-on activities and hosted by the Australian National Botanic Gardens. My boys came along with me today and were fascinated by the snakes and loved being told about the different species, what they ate, and where they live.

My media release for the event is below.

Member for Fraser Andrew Leigh today opened the ‘Snakes Alive’ exhibition, an event conducted by the ACT Herpetological Association with the support of the Australian National Botanic Gardens.

“The ‘Snakes Alive’ display shows snakes, along with other reptiles and amphibians, as part of Australia’s delicate ecological balance,” said Andrew Leigh. Dr Leigh handled a python as a part of the opening event.

“ ‘Snakes Alive’ provides an opportunity to safely handle suitable pythons, lizards and turtles to practically experience some of their characteristics. It’s a hands-on event suitable for all the family.

“Visitors can also observe snakes, lizards and frogs being fed, and have the animals’ requirements explained to them.

“My two young boys came out to see the display with me today and are very excited about being able to see some snakes. I encourage all Canberrans to bring their families along to this unique exhibition.”

The event is nationally recognised as the leading such display in Australia.  This year marks the 20th Anniversary of ‘Snakes Alive’ display by the ACT Herpetological Association.

The ACT Herpetological Association provides an important role in the ACT by informing the Environment and Sustainable Development Directorate about local endangered species of reptiles and amphibians.
Do you like this post?
Tweet