Whitlam Without the Dismissal 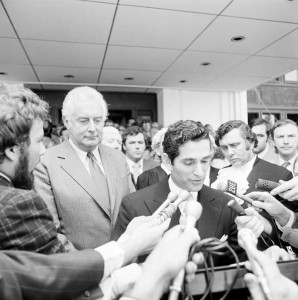 Last night, I gave the guest lecture at Werriwa FEC's 35th anniversary dinner to remember the Dismissal. My theme was 'Whitlam Without the Dismissal' - taking a guess at how Australia might have looked if Kerr hadn't acted. Counterfactual history isn't new - one of my favourites is Mark Lawson's Idlewild (which imagines a US in which Marilyn and JFK survived). And there was even an Australian book titled What If? that was published a few years ago.

I'm not sure that I'll get a chance to turn my speech notes into a transcript, so let me give you the short version. Whitlam survives until 1983, carrying out major economic reforms, a vast arts renaissance, and a treaty with Indigenous Australians. The Peacock government rules from 1983-93, and is socially liberal but economically inept. The Beazley government takes over from 1993 and continues economic reform, while deftly defusing the Hanson phenomenon. (I resisted the temptation to go past the Beazley government.)

Under this theory, Australia stays in sync with the US and UK political cycles: left-wing in the 1980s, and right-wing from the mid-1990s. That said, luck still plays a major part in my story - it's just that instead of Bertie Miliner's heart attack and Vince Gair's love of prawns, it's the global recessions of the early-1980s and early-1990s that cause power to change in Australia.
Do you like this post?
Tweet